In recent years, the armed service has been striving to capitalize on new technologies, such as artificial intelligence, virtual reality and drones, in the face of such challenges as the planned troop drawdown and uncertainties in the regional security landscape.

"Over the past year, the Army has exhausted all its efforts in a desperate attempt to achieve the transformative leap," he said during a security forum.

"As we have sought out strategic partnerships in all domains with the civilian sector with an open mind, we have put into consideration the future challenges that may befall us in the hopes of reaching a solution," he added. 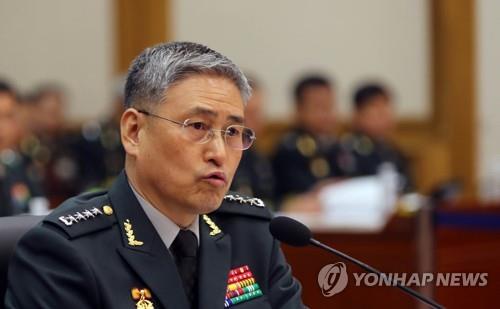 Kim pointed out that the Army has made strides in its reform efforts, including its push to introduce to key combatant units its much-vaunted "warrior platform," high-tech battle gear featuring advanced bulletproof helmets, sniper rifles, night-vision devices and other equipment.

In addition, the Army has been fleshing out a comprehensive plan to employ drones and robots for surveillance and reconnaissance operations, explosive ordnance disposal or other peacetime and wartime missions.

The Army chief noted that such progress in reform efforts is a testament to the backing from the parliament, academia, industries and research centers.