South Korean Foreign Minister Kang Kyung-wha met Mohammad Al-Tuwaijri, the Saudi Arabian minister of economy and planning, in Seoul. She said that the two sides should closely work together so that their leaders can have summit talks in the future, to which Al-Tuwaijiri concurred.

The two ministers acknowledged that since South Korea and Saudi Arabia established diplomatic ties in 1962, their cooperation has diversified to a range of sectors. They agreed to discuss mutual cooperation in detail when officials from the two sides meet at the 19th Korea-Saudi Joint Committee meeting later in this year.

Al-Tuwaijri asked for South Korea's support for its "Saudi Vision 2030" plan, which is intended to reduce the kingdom's dependence on oil and develop other industrial sectors. Kang said South Korea supports the Arab nation's efforts for change, adding that the South Korean government and companies will be ready to contribute. 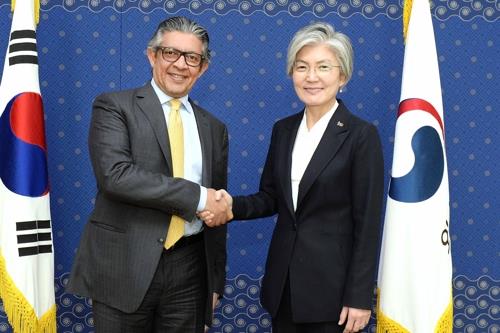