SEOUL, April 4 (Yonhap) -- Rival parties struggled to digest the fallout of the recent by-elections Thursday, with the ruling Democratic Party (DP) vowing efforts to improve people's livelihoods by taking into account negative public sentiment toward it.

The main opposition Liberty Korea Party (LKP) and the leftist Justice Party each won one parliamentary seat in Wednesday's elections, a barometer of voter sentiment ahead of the 2020 general elections.

The DP fielded a single candidacy with the minor party to muster liberal votes. Despite the joint candidate's victory, the DP effectively lost to the LKP as it failed to put its name on any of the five seats up for grabs in the by-elections. The five also included three precincts for local councilors.

"The DP will do its best in revitalizing the regional economy and taking care of people's livelihoods in Tongyeong-Goseong," DP floor leader Hong Young-pyo said of the district where its candidate lost to an LKP rival by a large margin.

Rep. Yun Ho-jung, secretary general of the DP, said his party will maintain its drive for reform by espousing the spirit of candlelight vigils.

"The people are great and we felt the fear of public sentiment," Yun said.

"We think we should focus on enhancing people's livelihoods and carrying out reform tasks."

DP spokesman Lee Hae-sik stressed that the party will pump up its efforts to live up to the expectations of the people.

"We urge opposition parties to join hands in boosting the economy and passing reform bills," he said.

The by-elections were regarded as a mini general election that could serve as a gauge of public sentiment in South Gyeongsang Province, where parliamentary seats in two districts were up for grabs.

The province, the manufacturing hub of the auto and shipbuilding industries, has been hit the hardest by the slowing economy. The economic downturn is believed to have been a key factor in affecting voters.

The conservative LKP said that the elections yielded a meaningful outcome, pledging efforts to clinch an overwhelming victory in next year's general elections.

"The election results reflect the people's warning against the government and the ruling party's arrogance," LKP floor leader Na Kyung-won said. "We will reach out to the people by accepting their order for us to march in a humble way." 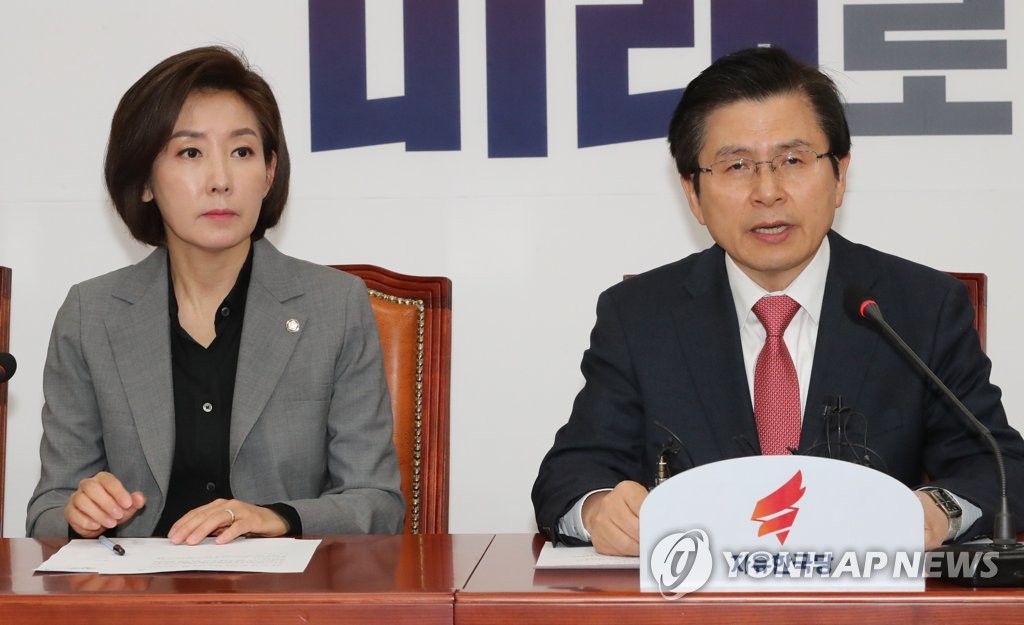 President Moon Jae-in appointed seven minister nominees in March, but some of them came under fire over alleged real estate speculation and other ethical lapses. Moon withdrew his nomination of the science minister and the transport minister stepped down.

A presidential spokesman also resigned last week over allegations that he made a speculative investment in real estate in a redevelopment area in Seoul.

The minor Justice Party said it will push for discussions with the minor liberal Party for Democracy Peace (PDP) to form a joint negotiation bloc again.

The formation of a floor negotiation group requires at least 20 lawmakers. The groups are involved in major parliamentary negotiations.

The leftist party and the PDP previously formed a joint negotiation group, but it broke down last year as the Justice Party lost one member with the suicide of its iconic progressive lawmaker Roh Hoe-chan.

The recent elections restored the leftist party's seats to six, and the PDP now holds 14 posts in the 300-member National Assembly.

PDP lawmakers are divided over whether to form the group with the Justice Party.

The minor opposition Bareunmiare Party, meanwhile, was stung by the elections as it failed to secure any seat.

It only fielded a candidate in Changwon, but the conservative party still ended in fourth place.

The idea of operating the party in an emergency mode is being floated, with some members calling for party chairman Sohn Hak-kyu to step down.

(LEAD) Rival parties struggle to cope with fallout of by-elections

(LEAD) Rival parties struggle to cope with fallout of by-elections