SEOUL, April 5 (Yonhap) -- A devastating fire has engulfed the northeastern border town of Goseong, leading to one death, at least 11 injuries, and damage to numerous buildings and houses.

According to the Gangwon Fire Headquarters, the fire broke out on a roadside in Goseong, around 210 kilometers northeast of Seoul, at around 7:17 p.m. Thursday and spread to a nearby mountain. This led to the evacuation of residents and guests of a nearby condominium.

Police found a body of a man on a road who had apparently died as a result of the fire. While it was earlier reported that a woman was found near a village center in Goseong as well, it was later confirmed that she did not die from the fire.

The number of injuries stands at 11, with the figure expected to rise Friday. The number of residents who were evacuated topped 4,000, sources said.

The affected area is estimated at 250 hectares, although the detailed scope is yet to be confirmed.

Around 120 houses were destroyed by the fire, along with vinyl greenhouses. 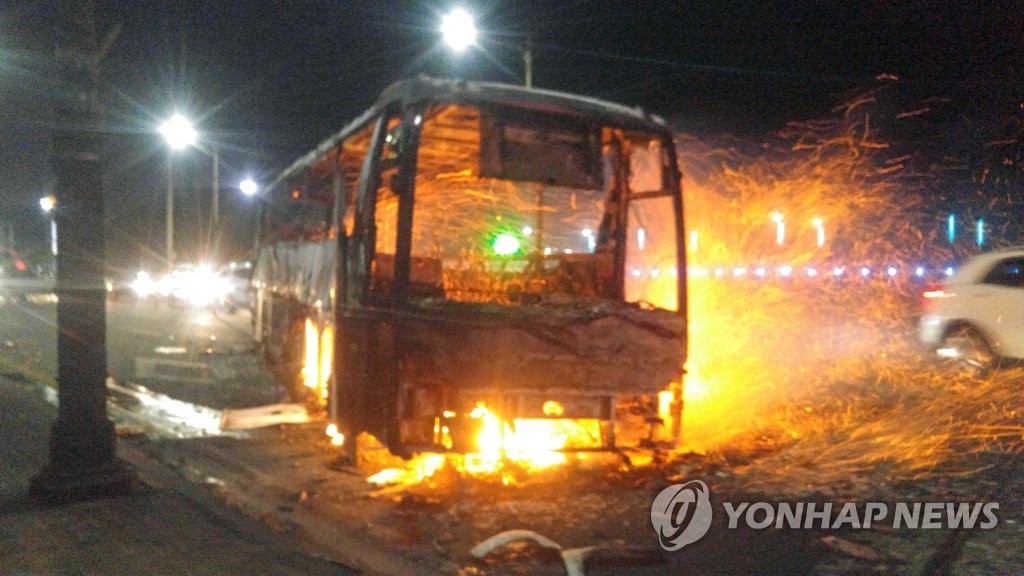 The fire quickly spread throughout the region, fanned by strong winds, reaching 5 kilometers per hour. The affected areas include Sokcho.

The National Fire Agency said it has ordered the headquarters of all major regions to send fire trucks to Goseong.

Specifically, half of the available workforce and vehicles in Seoul, Incheon, Sejong, Daejeon, Gyeonggi Province and other regions were dispatched to Goseong. A third of the firefighters and trucks from Busan, Ulsan, South Jeolla Province and other areas also were called in.

As of early Friday, the fire agency said 872 firetrucks from across the country had been mobilized, including 52 units from Gangwon Province.

A total of around 10,000 personnel, including 3,250 firefighters and thousands of civil servants, the military and police, have been mobilized to combat the flames.

The fire agency said it plans to mobilize 51 helicopters, including 13 from the military, at daybreak to carry out rescue and firefighting missions.

Due to the strong winds, experts said the extent of the damage and casualties is expected to grow throughout the day.

The fire agency said it issued the highest level alert -- level three -- as of 9:44 p.m. Thursday.

The first level indicates a fire is affecting only a limited area, while the second step is issued for a fire covering more than one city or province. The top level is issued for accidents affecting the entire nation, reflecting the seriousness of the situation.

The authority initially sent 23 fire trucks and 78 personnel under the stage-two alert. 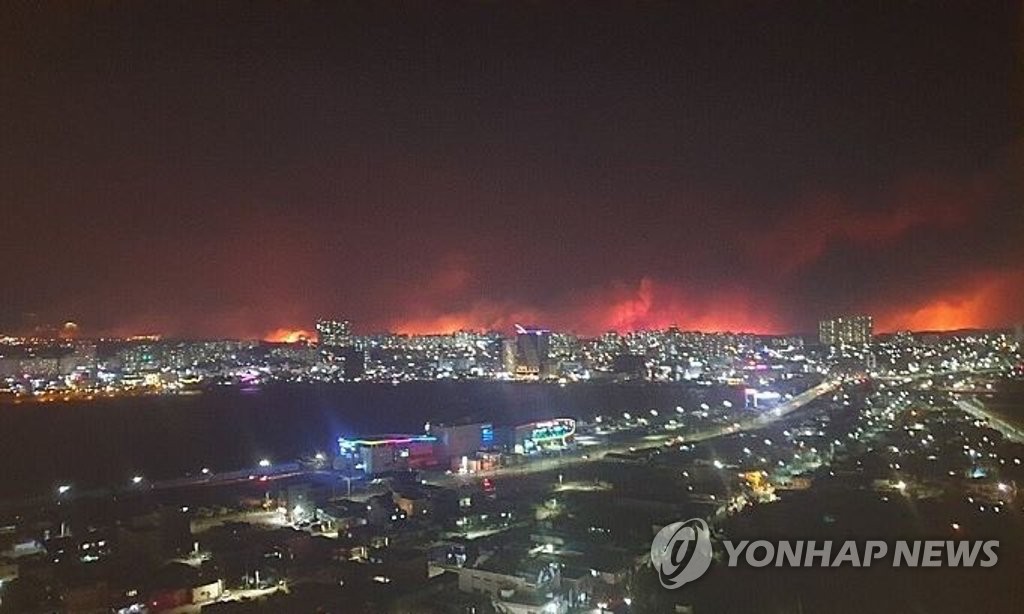 Sources said a number of buildings and houses were damaged by the fire, with the chaotic situation making it complicated to gauge the extent of the damage and track potential casualties.

President Moon Jae-in ordered related authorities to utilize all available measures to cope with the fire.

The government kicked off the Central Disaster and Safety Countermeasures Headquarters on Friday to cope with the incident. The body is organized in case of serious disasters. 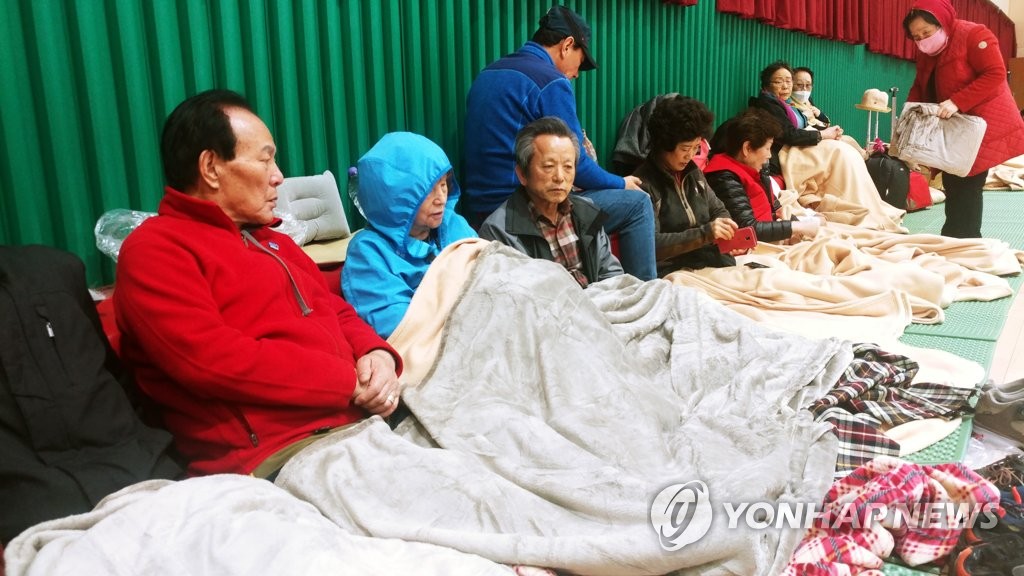 The Gangwon Provincial Office of Education announced all schools of Sokcho will be closed on Friday.

It remained unclear when the fire could be brought under control due to the strong winds, with darkness also making the mission difficult.

With the winds anticipated to remain strong through noon Friday, experts said firefighters face a daunting task, with the region's humidity also low at around 20 percent.

"As the wind is especially strong, we are focusing more on reducing casualties than extinguishing the fire," said Gangwon Gov. Choi Moon-soon. "As soon as the sun rises, we will make best efforts to put out the fire as soon as possible."

With the fire spreading to a nearby village, the Gangneung city government evacuated 120 patients from a nursing home and an untold number of residents.

The city plans to launch an all-out effort to extinguish the blaze at daybreak. 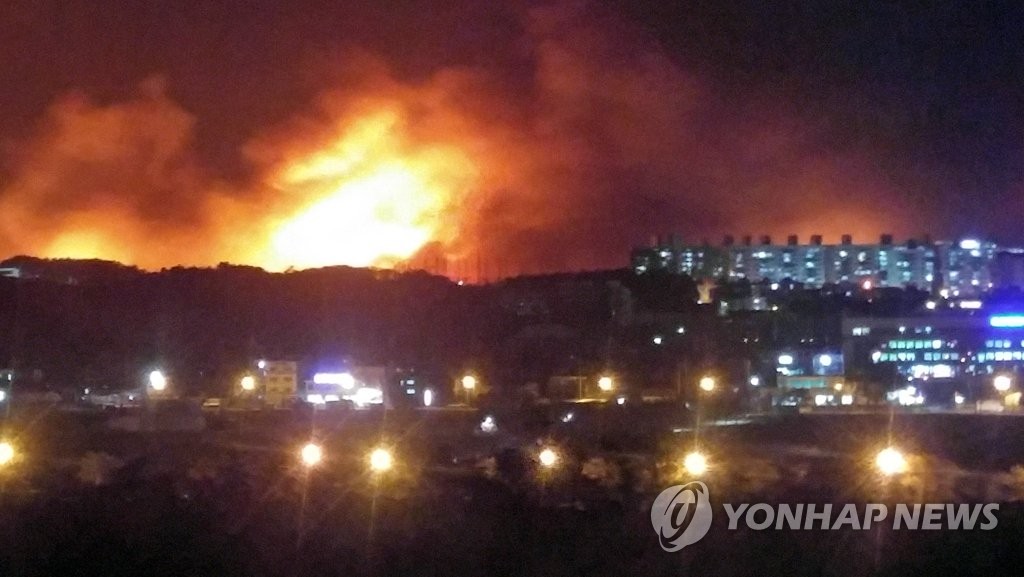