SEOUL, April 5 (Yonhap) -- South Korea's National Assembly on Friday ratified the country's accord with the United States that calls for an 8.2 percent hike in its share of the cost of stationing American troops here. It took effect immediately.

At a plenary session, lawmakers passed a related motion in a 139-33 vote, with 22 abstaining.

The Special Measures Agreement (SMA) is subject to parliamentary ratification in South Korea. But the U.S. does not require its congressional approval.

Since 1991, the USFK has used South Korean taxpayers' money to fund the wages of South Korean workers, the construction of base facilities and logistics.

South Korea's foreign ministry said Seoul and Washington notified each other of the completion of the domestic procedures needed for the deal to be effective.

"The move is expected to provide conditions for the stable stationing of American troops here and greatly contribute to strengthening the two nations' alliance and enhancing trust-building," the ministry said in a statement.

The allies are expected to start negotiations in the coming months on splitting USFK costs after the end of this year.

The existing deal is the result of a series of tough negotiations between the allies.

The United States reportedly demanded a sharp hike of Seoul's share up to $1.2 billon. Washington also called for a one-year contract, while Seoul wanted it to last three to five years.

President Donald Trump has openly pressed some U.S. allies to stop what he calls a free ride in their national defense.

The National Assembly, meanwhile, passed 110 bills on the final day of the extraordinary session.

The legislation includes a revised bill aimed at strengthening punishment against those who assault hospital employees.

The so-called Lim Se-won law was enacted amid mounting calls to guarantee the safety of medical workers following the murder of a psychiatrist by his patient in December.

A man suffering from bipolar disorder stabbed his doctor, Lim, to death during treatment at a general hospital in Seoul.

Under the bill, assailants can face life imprisonment or jail terms of at least five years if medical workers are killed in attacks while on duty.

In the case of injury, attackers could face prison terms of up to seven years and more than 10 million won in fines.

They agreed to open an April extra session Monday for one month to handle key bills on the economy and reforms. 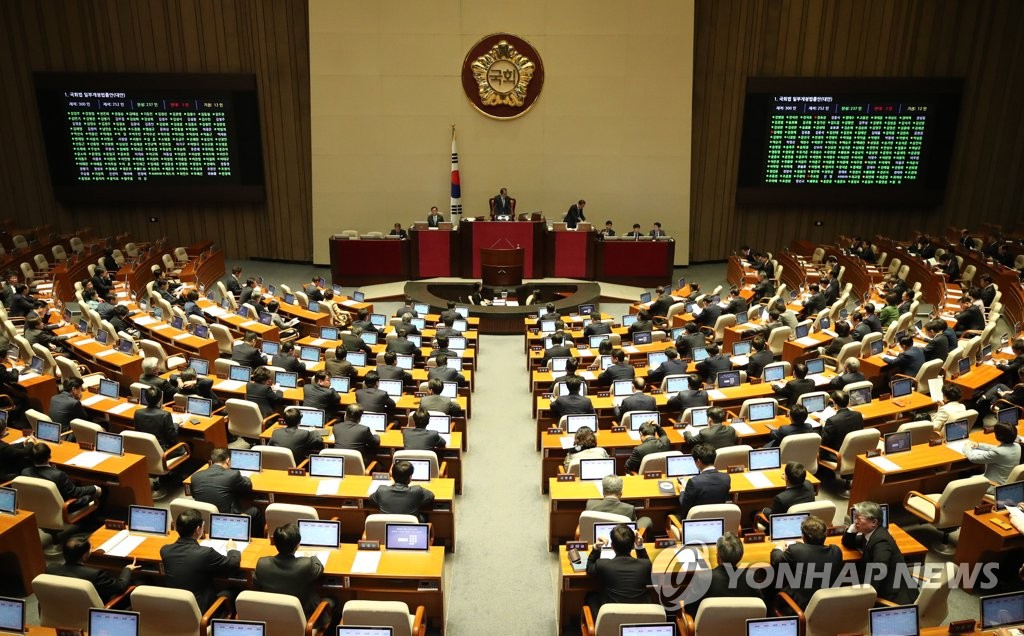