According to the comparable data by the Organization for Economic Cooperation and Development (OECD), South Korea's consumer price index (CPI) rose 0.5 percent on-year in February.

It was the second-lowest figure among the 36 OECD member countries after Japan, which posted a CPI of 0.2 percent for February.

Only three other countries -- Greece, Ireland and Portugal -- had a CPI lower than 1 percent.

Moreover, South Korea's energy prices fell the most at 5.9 percent in February, outnumbering Canada with 5.7 percent and the United States with 5 percent.

The country's food prices rose 0.4 percent in February, lagging far behind the OECD average of 2.3 percent.

The Amsterdam-based ING Group had a forecast of 0.6 percent CPI for South Korea, while the Swiss banking giant UBS logged 0.7 percent and Japan's Nomura posted 0.8 percent.

Some said the country is entering a cycle of deflation, referring to a general decline in prices of goods and services. It usually comes with an economic recession led by a reduction in aggregate demand.

"I don't think we face deflation right now, but it is necessary to take the protracted low inflation into account," said professor Yang Jun-sok from the Catholic University of Korea. "The current growth of consumer prices is very low. We have to seek ways to increase aggregate demand to push up the prices."

South Korea's CPI has been far below the target inflation of 2 percent set by the Bank of Korea (BOK) for years. 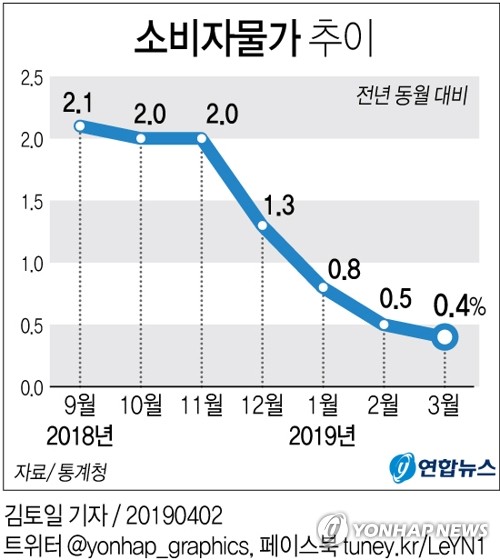