SEOUL, April 9 (Yonhap) -- President Moon Jae-in on Tuesday called for stepped-up efforts to ensure equal opportunities for all people, asserting the building of the nation that began 100 years ago will be completed when all people fully and equally enjoy the benefits of development.

Moon's remarks came as the country celebrates the centennial of the establishment of its provisional government on Thursday.

The provisional government was set up 100 years ago on April 11 in China while the country was under the colonial rule of Japan that lasted between 1910 and 1945. 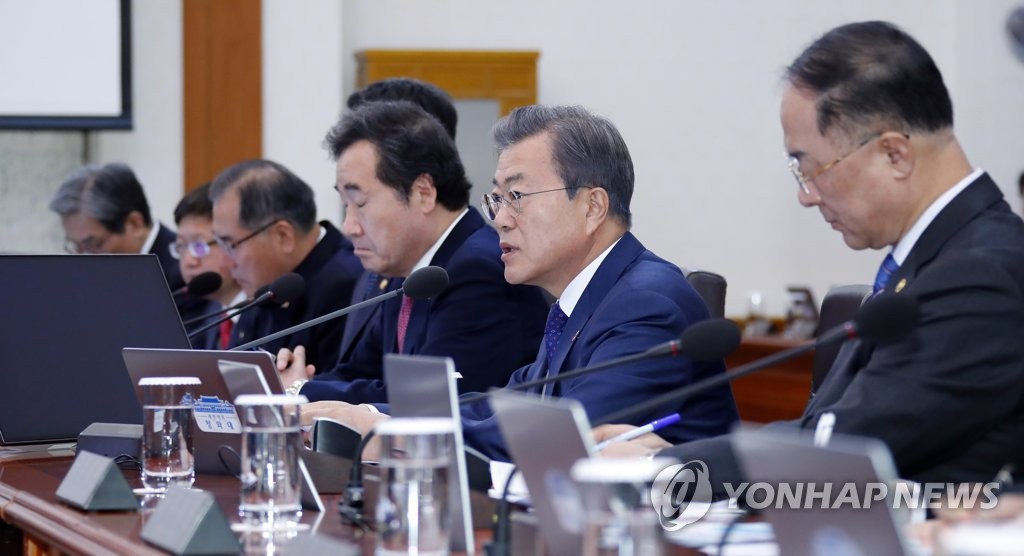 Moon said the country has come a long way since its liberation to become one of the most advanced nations in the world, noting the country has become the world's seventh nation ever to have more than 50 million in population and per capita income of over US$30,000.

"Our history of developing democracy while realizing the sovereignty of the people is also amazing," the president told the meeting, according to Cheong Wa Dae pool reports.

"A country that has succeeded in both economic development and democratization, that is how the world views our country. Many countries wish to learn about our development experience. We well deserve to have pride," he added.

The president, however, said the country may have not reached the end state of its national building.

To this end, the president vowed efforts to build a fair and equal nation.

"We are now moving toward the Korean Peninsula peace process. I will visit the United States tomorrow for a South Korea-U.S. summit. I will do my utmost for an early resumption of North Korea-U.S. talks," Moon said.

In the first Cabinet meeting held after a massive fire that engulfed the country's east coast, the president stressed the need for efforts to prevent such disasters while calling for all-out support for the victims.

"Globally, forest fires are becoming more frequent and more powerful. I ask you to take special care in finding the causes of forest fires and preventing them," he said.

The fire, which began in the northeastern city of Goseong on Thursday, quickly spread to four other cities and counties in Gangwon Province, leaving one person dead and about a dozen injured while also displacing thousands of people.

Moon offered his condolences to the victims.

"Enhancing the public safety and national disaster management system requires budget spending. I ask to first provide emergency relief and compensation for damage from the reserve fund and secure the budget needed to enhance the public safety system by reflecting this in a supplementary budget if necessary," the president added.