SEOUL, April 9 (Yonhap) -- The first ladies of South Korea and the United States plan to hold a one-on-one luncheon in Washington this week on the sidelines of the Seoul-Washington summit, the presidential office Cheong Wa Dae said Tuesday.

South Korean first lady Kim Jung-sook is scheduled to head to Washington on Wednesday to accompany her husband, President Moon Jae-in, for a two-day visit there.

On Thursday (Washington time) at the White House, first lady Kim plans to attend a one-on-one luncheon to be hosted by her U.S. counterpart Melania Trump, according to Kim Hyun-chong, a deputy director of Seoul's National Security Office at Cheong Wa Dae.

Noting that such an arrangement between the first ladies of the two nations "is not usual," the event "is expected to deepen the already special relations" between them, he added.

If held as planned, it will be the first of its kind in nearly 30 years, as such an event was last held in October 1989 between then-first lady Kim Ok-sook and her American counterpart Barbara Bush when then-President Roh Tae-woo visited the U.S. for a summit with George H.W. Bush.

Since Trump took office in January 2017, Melania Trump has hosted seven rounds of such events of first ladies, including one with her Colombian counterpart in February this year.

On the table for the summit between Moon and U.S. President Donald Trump will be how to resume denuclearization negotiations with North Korea, according to officials. Their seventh meeting comes less than two months after the talks between the U.S. and the North ended without a deal. 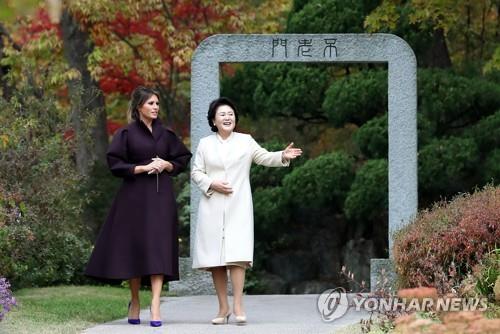