The remark, made at an enlarged meeting Tuesday of the Political Bureau of the Central Committee of the Workers' Party, suggests the North is unlikely to announce any major policy shift at this week's parliamentary meeting despite the no-deal breakdown of Kim's summit with U.S. President Donald Trump.

"The Supreme Leader urged the need for leading officials to fully display a high sense of responsibility and creativity, and the revolutionary spirit of self-reliance and fortitude in an attitude befitting the masters of the revolution and construction under the prevailing tense situation and thus follow through on the new strategic line of the party," the Korean Central News Agency said. 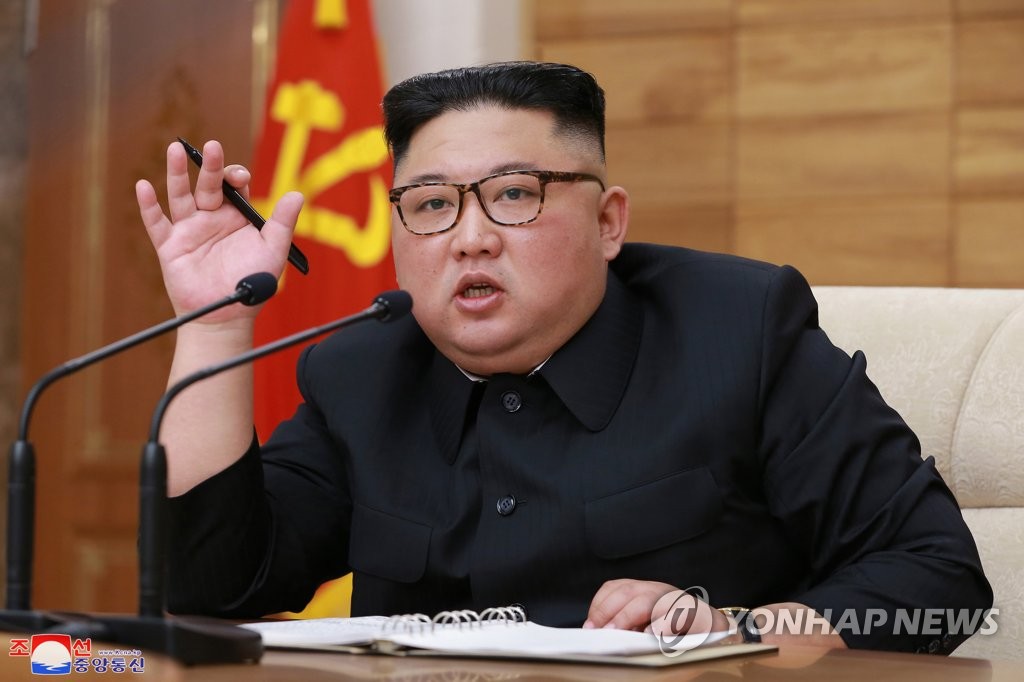 The new strategic line apparently refers to a decision the party made last April to focus more on economic development, suggesting a departure from Kim's signature "byongjin" policy of seeking both economic and nuclear development.

The party meeting came two days before North Korea is set to hold the first session of the 14th Supreme People's Assembly on Thursday since new deputies were elected last month to the country's parliament.

The KCNA reported that a plenary session of the ruling party's central committee will also be held Wednesday "in order to discuss and decide the new orientation and ways of struggle in line with the need of the prevailing revolutionary situation."

Those meetings are drawing keen attention as North Korea could disclose its next steps following the breakdown of February's summit between its leader Kim and Trump in Hanoi, Vietnam.

They also coincide with a summit between South Korean President Moon Jae-in and Trump in Washington scheduled for Thursday (local time) at which North Korea will likely be one of the top agenda items they will discuss.

"Kim's remarks during the politburo meeting appear to be making it clear again that he wants to tighten up internal discipline to achieve the new strategic line," said Lim Eul-chul, a professor at the Institute for Far East Studies at Kyungnam University.

"Kim, in the meantime, will pay close attention to what comes out of the planned summit between South Korea and the U.S.," he added.

The Hanoi summit fell apart as Kim and Trump failed to find common ground over how to match Pyongyang's denuclearization steps with Washington's sanctions relief.

Pyongyang wanted major sanctions relief in exchange for dismantling its Yongbyon nuclear facility. But Washington insists on what officials described as "a big deal" that calls for trading sanctions relief for the dismantlement of all of the North's nuclear and other weapons programs.

At the White House summit, Moon is expected to try to bridge these differences.

In recent weeks, South Korean officials have talked increasingly about "a good enough deal" and a need for an "early harvest," expressing hopes that the U.S. will soften its position on a big deal and meet the North halfway.

In Washington, however, U.S. Secretary of State Mike Pompeo said all sanctions will remain in place.

Asked during a Senate hearing if "maximum economic pressure" remains the Trump administration's position on the North, Pompeo replied yes.

North Korean Vice Foreign Minister Choe Son-hui warned last month that the North could end its denuclearization talks with the U.S., saying that it will not give in to Washington's "gangster-like" demands. She added that the leadership will soon make an announcement on whether it will continue nuclear talks.

Meanwhile, top North Korean negotiators who spearheaded preparations for the ill-fated Hanoi summit appeared at Tuesday's politburo meeting, dispelling speculation that they could be punished for the failure of the highly-anticipated talks.

Kim Yong-chol, Pompeo's counterpart in the talks process, was seen attending the meeting in photos released by the KCNA. Foreign Minister Ri Yong-ho, who announced the collapse of the summit in Hanoi, was also spotted taking part in the meeting.

Their attendance suggests that the North Korean leader might not seek any major shift in the makeup of his team in charge of nuclear negotiations with Washington.

In a three-minute video clip released by the North's state TV, Kim was seen talking to the officials while making various hand gestures. In one photo from the KCNA, Kim was holding up a clenched fist while talking. 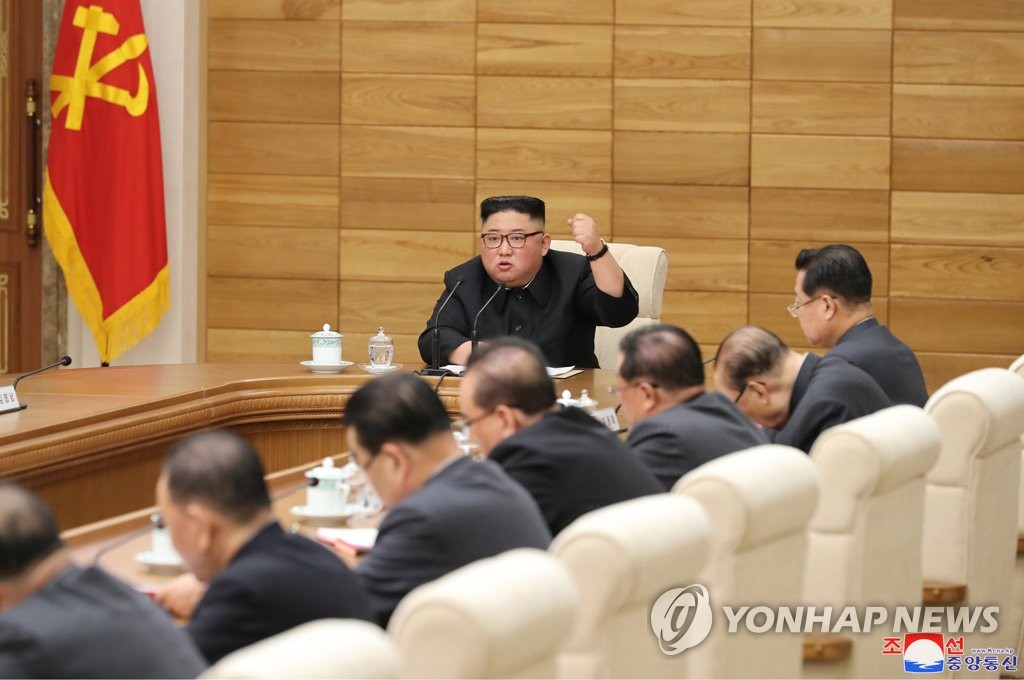