Debuting on the small screen on April 1, the Monday-Tuesday series garnered a Content Power Index (CPI) score of 286 for the week of April 1-7, landing atop the weekly TV chart compiled jointly by CJ ENM and Nielsen Korea.

Jung-kook, a trickster played by Choi, gets entangled in a unpredicted incident in which Hoo-ja, played by actress Kim Min-jun, half-forces him to run for a parliamentary seat, harboring a shady plan.

Lacking experience and knowledge, Jung-kook initially becomes a puppet of Hoo-ja in what becomes his political journey to discover and promote social justice.

The drama marks Choi's official return to the entertainment scene after he came under fire for his unleashed pet dog's attack on a middle-aged woman in his apartment building in 2017, which led to her death. 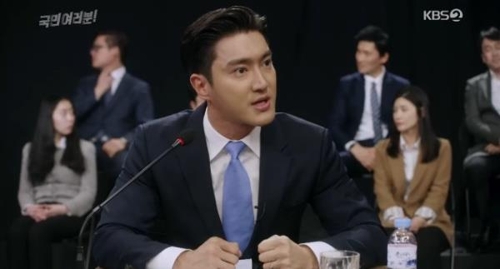 No. 2 went to "The Fiery Priest," a weekend drama series by SBS, which garnered a CPI score of 250.3. Ahead of its end in late April, the series has recently reached a viewer rating of nearly 20 percent.

The long-running late Friday night show by MBC "I Live Alon" stood in the third spot, with a CPI number of 237.1. 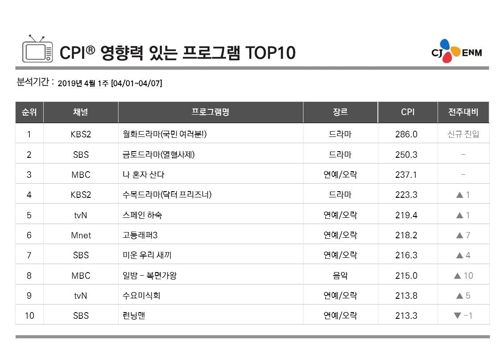 JTBC, another cable network that airs some highly popular entertainment shows and dramas, is not included in the index.