(ATTN: UPDATES with gov't and parties' response to ruling in last 4 paras; RECASTS lead with a minor edit)
By Kim Seung-yeon

The nine-justice panel made the ruling in a 7-2 vote, in response to a 2017 complaint filed by an obstetrician standing trial for performing multiple abortions. A vote of two-thirds is required to reverse a ruling.

The court found that an outright ban on abortion under the criminal law is against the Constitution and ordered allowing termination in the early stages of pregnancy.

Thursday's ruling requires the parliament to revise the related laws by the end of next year.

"(The current law) limits the pregnant woman's right to choose freely, which is against the principle that infringements on a person's rights must be kept to a minimum," it said.

The court also deemed it unfair to give more weight to the value of protecting a fetus's life, when it violates the woman's rights.

The adjudication comes 66 years after Korea first enacted the law in 1953 criminalizing the termination of a fetus. Only after 1973, through separate legislation, did Korea begin to allow exceptions in a handful of cases, such as rape, incest, or when it's related to the mother's health or a hereditary disorder.

The claimant argued that Article 270 of the Criminal Code, which states that a physician shall be imprisoned for up to two years for the offense, infringes upon a woman's right to a free choice.

For the pregnant woman, undergoing the procedure is punishable by a prison term of up to one year or a 2 million-won (US$1,750) fine, according to Article 269 in the criminal law.

The court on Thursday agreed with the argument, overturning its previous decision in which it upheld the law in a 4-4 vote in August 2012.

It had ruled that a fetus's right to life must be protected and that is no less important than a woman's right to make a free choice. Not punishing abortion as a criminal offense would also make the procedure pervasive in society, the court said.

The shift in the Constitutional Court's opinion underscores a change in public perception and the social climate. Legal experts predicted Thursday's ruling would be different, with the court acknowledging the inconsistency in the existing rules.

Critics have questioned the law's effectiveness, since few people are actually being punished for abortion. According to prosecution data, there have been approximately only 15 indictments for abortion every year since 2015, and in many of them, the defendants received suspended sentences.

A survey by Gallup Korea conducted last month showed 45 percent of the respondents agreed that abortion is another word for murder, a decline from 53 percent in 2016 and 78 percent in 1994.

In a 2017 survey by Realmeter, 52 percent said the law should be abolished, a reversal from the 53 percent opposition in a 2010 poll.

The court decision also comes at a time when Korea is struggling to cope with a low birthrate. South Korea's fertility rate, or the average number of children a woman is expected to have in her life, stood at 0.98 in 2018, the lowest among the OECD nations.

Ahead of the court ruling, rights groups for and against abortion held a series of rallies in front of the courthouse in Seoul to voice their opinions.

A pro-choice group, Safe Abortion, called for a reversal in the ruling, saying that women should be allowed to make decisions about their own lives and bodies.

Another liberal group said in a press conference that women are not "tools to produce babies" and urged the evangelical Christian community that is against abortion to consider the pain of women.

Opposing groups also gathered to protest against repealing the anti-abortion law. Holding pickets that read "Abortion is murder", and "Who has the right to kill life?" they called for the court to retain the previous decision.

The government said it respects the court's ruling.

"Relevant government ministries will cooperate to seamlessly come up with follow-up measures to the court's decision," the government said in a statement.

Political parties gave a similar response, stressing the need to make legislative efforts to back up the ruling.

"The National Assembly should immediately seek to revise relevant laws including the Criminal Code and a law on mother and child health to minimize the social turmoil that may occur due to a legislative vacuum," Lee Hae-sik, spokesman at the ruling Democratic Party, told a press briefing. 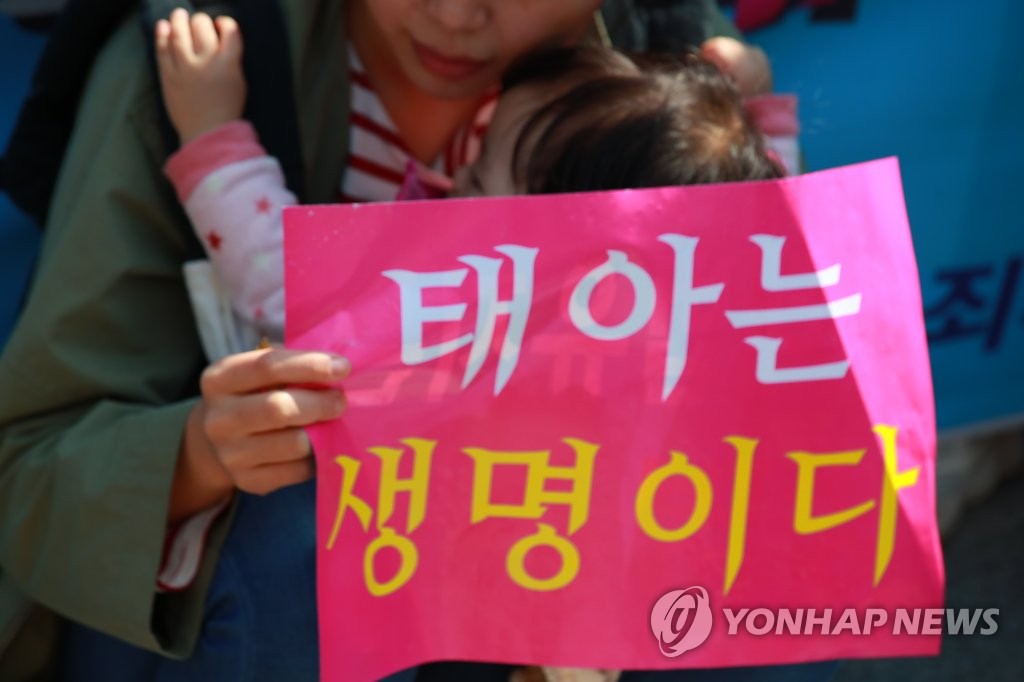