SEOUL, April 11 (Yonhap) -- Various circles of South Korean society showed conflicting responses to the Constitutional Court's ruling in favor of abortion rights on Thursday, depending on their political and religious orientations.

In a landmark ruling, the Constitutional Court ruled an outright ban on abortion is unconstitutional and called for a legislative change to partially allow the termination in the early stage of pregnancy.

Liberal civic activists and doctors welcomed the top court's ruling, whereas conservatives and religious groups expressed strong dismay at its decision to ease the abortion ban. 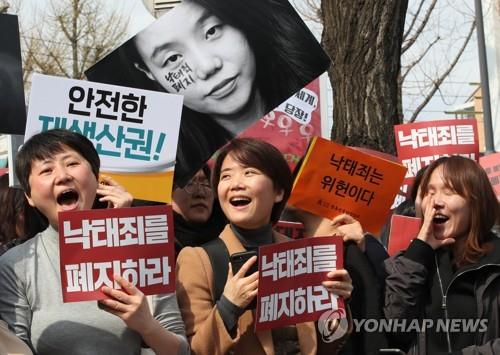 The domestic medical community welcomed the top court's pro-choice ruling, saying it is based on reality and will help protect the health of pregnant women.

Medical circles have long protested against criminal punishment of doctors accused of performing abortions and women accused of terminating a pregnancy. Aborting a fetus is punishable by a prison term of up to one year or a 2 million-won (US$1,750) fine under the criminal law enacted in 1953.

"Obstetrics and gynecology doctors want to abide by the law. But the problem is the law is too far from reality," said Kim Dong-suk, chairman of the Korean College of Ob & Gyn.

"The Mother and Child Health Law that limitedly allows abortions was enacted in 1973 but has failed to reflect advanced medical technologies and experts' opinions," Kim said.

An Ob & Gyn doctor in Seoul said it is desirable to create an environment where pregnant women are allowed to choose an abortion without posing a risk to their health.

Protesters in favor of legal amendment held a series of rallies in front of the Constitutional Court, ahead of the top court's ruling on the constitutionality of the current law outlawing abortion. 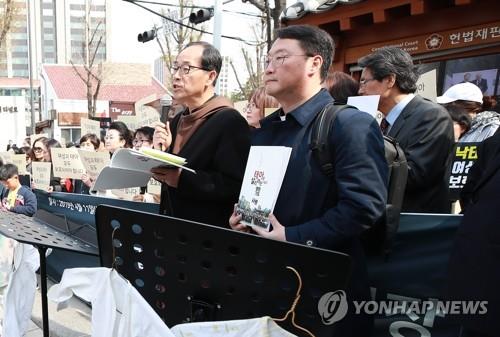 Twenty-three civic organizations, which formed an alliance named Safe Abortion, held a string of news conferences to call for a pro-choice ruling.

Hwang Kang-ha, a leader of the Socialist Revolutionary Workers' Party, one of the alliance members, said that women have the ability to exercise their rights to determine their own body and life and thus the anti-abortion law should be ruled unconstitutional.

Following the court's verdict, the alliance issued a statement welcoming the ruling, calling for the creation of a society with gender equality that treats women as equal citizens and allows everyone to enjoy freedom of life.

Alliance members shouted slogans like "We oppose abolition of anti-abortion law" and "The state has to protect women and fetuses."

In a survey of 10,000 women and girls aged 15 to 44 by the Korea Institute for Health and Social Affairs between September and October last year, 33.4 percent said they chose abortion due to concern about hindrances in social activities, while another 32.9 percent cited economic hardships. 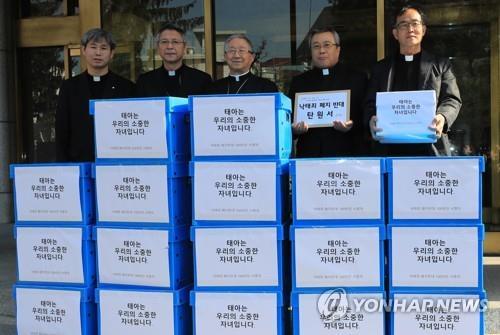 The Catholic Church of Korea expressed regret over the Constitutional Court's decision to ease abortion ban.

The Catholic Bishops' Conference of Korea issued a statement expressing deep regret at the Constitutional Court's ruling that the current law criminalizing abortion is unconstitutional.

"A fetus is a dignified human being from the moment of insemination. The ruling denies the basic right to life of the fetus, who has no means to defend itself, holds women responsible for unwanted pregnancy and unjustly exempts men from responsibility," the statement said.

"The Catholic Church's teaching is unchanged that abortion is a sin of directly killing the innocent life in the womb and cannot be justified for any reason."

The Catholic conference then vowed to extend full support and assistance to women and men who overcome the temptation to terminate a pregnancy and give birth to a child.

The Archdiocese of Seoul also delivered its regrets to the Constitutional Court and said in a separate statement, "The state must protect the lives and safety of the people at all times. We expect to have legal and institutional arrangements to protect the life of both pregnant women and the fetus."

The Catholic Church of Korea gathered 1 million signatures in opposition to an abolition of the anti-abortion law in March last year and delivered them to the Constitutional Court as part of its anti-abortion campaign.

"Today's ruling is a major step forward for the human rights of women and girls in South Korea. The country's draconian laws have resulted in discrimination and stigmatization for generations of women and girls by forcing them to undergo clandestine and unsafe abortions," Rife said.

"The Constitutional Court has sent a clear message this must change, and in future the human rights of women and girls must be fully protected and respected," Rife said.