In Pyongyang, North Korean leader Kim Jong-un sought to solidify his authority with a shake-up of top officials during a key parliamentary session. But Kim kept his U.S. negotiating team largely intact despite the no-deal breakdown of his February summit with Trump.

Speaking to Trump at the outset of the Oval Office meeting, Moon said, "The important task that we face right now is to maintain the momentum of dialogue and also express the positive outlook regarding the third U.S.-North Korea summit to the international community, that this will be held in the near future."

Trump responded positively, but made clear that he won't rush to have another meeting with Kim. 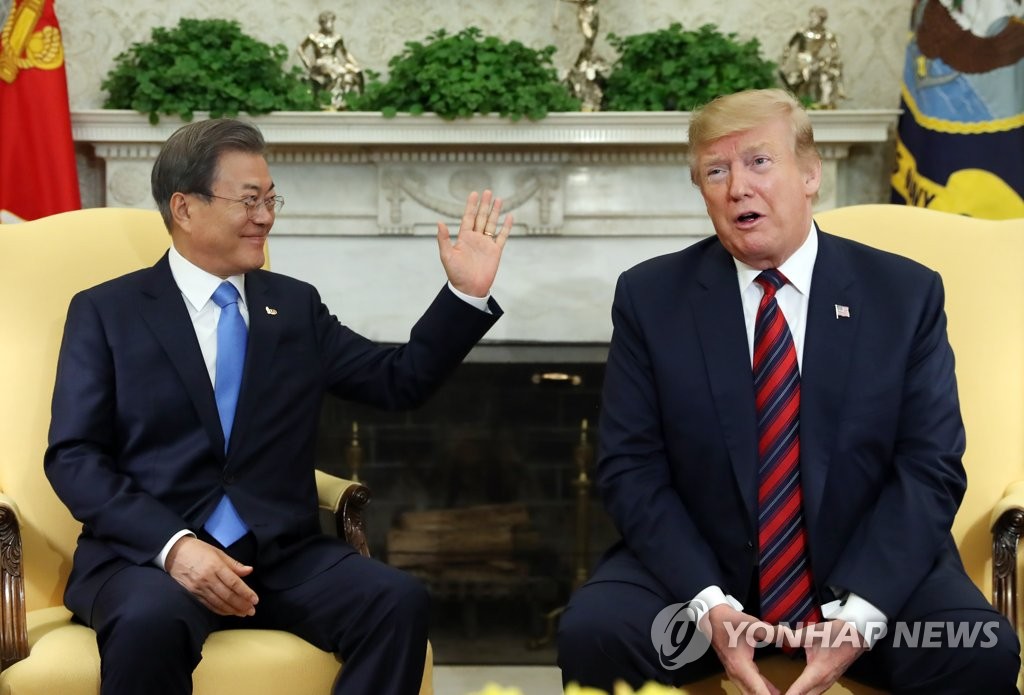 He reiterated that his "great" personal relationship with North Korea's leader is still in place.

"Kim Jong-un has been, really, somebody that I've gotten to know very well and respect, and hopefully - and I really believe that, over a period of time, a lot of tremendous things will happen."

The official told reporters, on the condition of anonymity, that Moon will seek to meet with the North's leader at an early date.

Trump's request encourages Moon to play peacemaker once again. His warm approach toward the communist neighbor led to three rounds of inter-Korean summits last year and two meetings between Trump and Kim.

The hard-won process, however, suffered a major setback in late February, when they left Hanoi with no deal after two days of bargaining.

Kim demanded major sanctions relief in return for the "verified" dismantlement of the Yongbyon nuclear facilities. Trump dismissed the offer, calling for a "big deal" to include a specific denuclearization roadmap and a firm pledge to give up all weapons of mass destruction.

At the White House this week, the South Korean president apparently aimed to coax Trump into some concessions in order to salvage nuclear negotiations.

He also had a series of separate talks with Vice President Mike Pence, Secretary of State Mike Pompeo and National Security Adviser John Bolton. It provided Moon with a rare opportunity to discuss strategies on North Korea in person with the influential trio.

The North's leader has notably placed an emphasis on economic development for "self-reliance" since the Hanoi talks. Kim has not talked publicly about terminating denuclearization talks, although his aides said he may be recalibrating an overall strategy as he was frustrated by the U.S. attitude in the Vietnamese capital.

Following the closely-watched session of the 14th Supreme People's Assembly on Thursday, the North's state-controlled media provided no related details, including whether Kim made a new decision.

He instead focused on cementing the power he seized in late 2011. In the rubber-stamp parliamentary event, he was re-elected as chairman of the State Affairs Commission, the nation's highest decision-making body,

Kim replaced Premier Pak Pong-ju with Kim Jae-ryong, a senior member of the ruling Workers' Party of Korea and fired the nation's nominal head of state, Kim Yong-nam. Choe Ryong-hae, vice chairman of the State Affairs Commission, has been named as his successor, the Korean Central News Agency reported.

After returning to Seoul, Moon and his team will scrutinize what was discussed in the Washington summit and push for another inter-Korean summit.

Moon hopes to present his own proposals on ways to move forward the denuclearization-peace process, along with Trump's message.

In the wake of the unsuccessful Hanoi summit, South Korean officials raised the need for a "good enough deal" to achieve "early harvest" in the lengthy process.

The Moon administration has formally pursued a "comprehensive" agreement, saying implementing it in a phased way can be an option.

The liberal president believes that resuming such joint ventures as the Mount Kumgang tour program and the Kaesong industrial complex can be leverage to cajole Pyongyang into a continued moratorium on nuclear and missile testing and denuclearization talks.

U.N.-led sanctions are an obstacle.

Trump said, "We want sanctions to remain in place. And frankly, I had the option of significantly increasing them. I didn't want to do that because of my relationship with Kim Jong-un."

He added, "I think that sanctions are, right now, at a fair level."