SEOUL, April 12 (Yonhap) -- Rival political parties gave mixed assessments of the latest summit between South Korea and the United States Friday, with the ruling Democratic Party (DP) hailing the meeting for reaffirming the strong alliance between the two countries.

The main opposition Liberty Korea Party (LKP) claimed, however, that the summit failed to produce concrete progress in efforts to get North Korea to give up its nuclear weapons.

President Moon Jae-in held a summit with his U.S. counterpart, Donald Trump, in Washington on Thursday in their first talks since the breakdown of the Hanoi summit between the U.S. and North Korea in February.

They reaffirmed close coordination toward the shared goal of completely denuclearizing the Korean peninsula and establishing permanent peace. Moon expressed hope for his fourth summit with North Korean leader Kim Jong-un, and Trump asked him to share what he may learn about the North's stance. 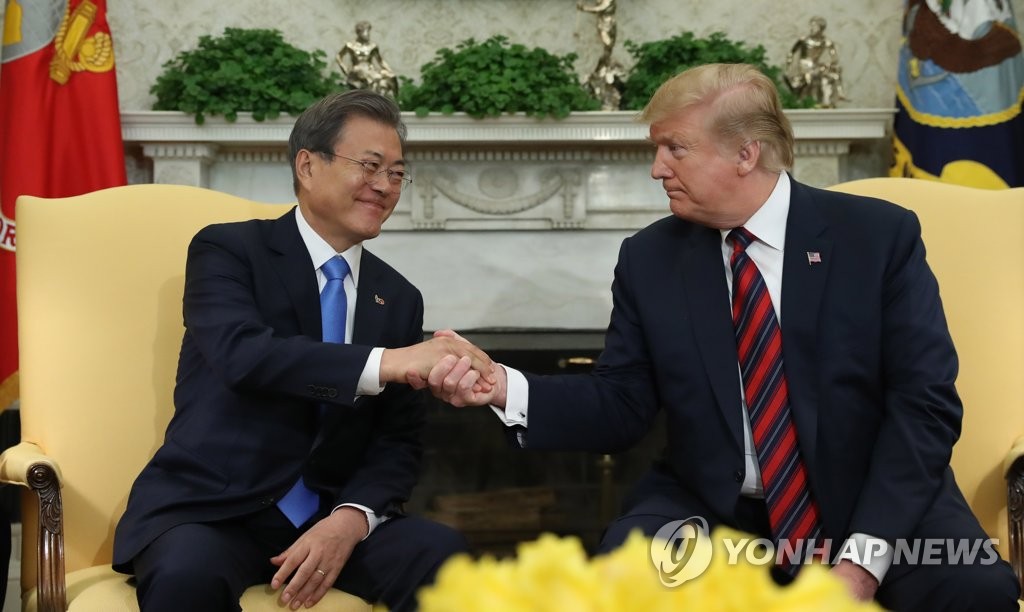 The governing DP said the allies reaffirmed the shared goal of North Korea's denuclearization based on their firm alliance.

"The two nations shared the understanding that top-down diplomacy is essential for the peace-making process (on the Korean Peninsula) and signaled that this approach will be viable down the road," DP spokesman Lee Hae-sik said in a statement.

Lee said the DP will foster cooperation to help Moon serve as a broker and facilitator between Washington and Pyongyang in resolving the North Korea nuclear issue.

DP chairman Lee Hae-chan assessed the summit as a critical and meaningful one.

"The both sides appeared to have shared a view about (the possibility of seeking) a comprehensive (denuclearization) deal and its phased-in implementation as a compromise between Washington's package deal and North Korea's gradual approach," he claimed.

But the LKP likened the summit result to something like a "drifting cloud."

"(Before the summit), the government signaled the U.S. may accept its 'good enough deal,' but the result was totally different," LKP floor leader Na Kyung-won said at a meeting with party officials.

In the wake of the breakdown of the Hanoi summit, South Korean officials raised the need for a "good enough deal" to achieve "early harvest" in the lengthy process of the North's denuclearization. The U.S. voices for a "big deal" that includes detailed denuclearization steps.

LKP chairman Hwang Kyo-ahn claimed the Moon-Trump summit only reaffirmed that the outlook for the North's denuclearization is darker.

"(Moon) voiced hope to hold his fourth inter-Korean summit swiftly, but a proposed summit should not be a venue where North Korea's positions are merely identified," he said.

Sohn Hak-kyu, the chief of the minor opposition Bareunmirae Party (BP), stressed Moon should not make the mistake of putting sanctions relief before denuclearization when he serves as a broker between the U.S. and the North.

The minor liberal Party for Democracy and Peace said that the Moon-Trump summit will help revive stalled talks between the U.S. and North Korea.

It also expressed regret that Seoul has failed to secure wiggle room in developing inter-Korean relations, as Trump said "it isn't the right time" for South Korea to reopen economic cooperation projects with North Korea.

The leftist Justice Party hoped the latest summit could pave the way for the two Koreas to hold a summit as early as possible.