SEOUL, April 15 (Yonhap) -- A Korean film about the tragic Sewol ferry sinking rose to the top spot of the weekend box office with the approach of the disaster's fifth anniversary, data showed Monday.

"Birthday" sold 231,089 tickets from Friday to Sunday for a cumulative total of 761,807, according to the data from the Korean Film Council (KOFIC).

Directed by Lee Jong-eon, the film starring Seol Kyung-gu and Jeon Do-yeon climbed a spot to top the chart in its second weekend, while the previous No. 1, "Shazam!" was pushed down to fifth.

The drama revolves around a family coping with the loss of their son in the ferry accident.

The Sewol ferry sank in waters off the southern coast on April 16 in 2014, killing 304 of the 476 passengers, most of whom were high school students on a school trip. It was one of South Korea's worst maritime disasters.

Superhero film of "Hellboy" finished second with an additional 155,584 tickets sold during the three-day period, with a total of 220,245 moviegoers on its first week at the box office.

South Korean movies "Another Child" and "Money" came in third and fourth, garnering a fresh 113,981 and 93,466 views, respectively, over the weekend. 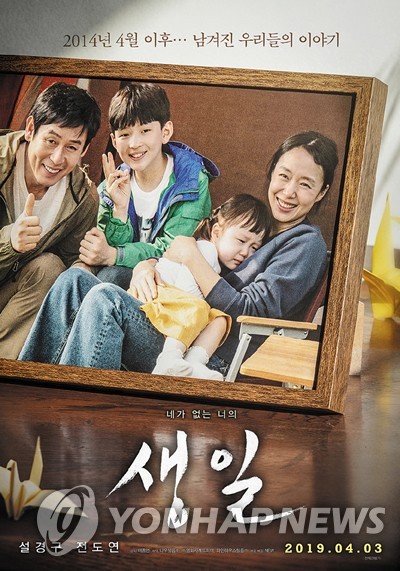