GWANGJU, April 15 (Yonhap) -- A Philippine activist championing the rights of indigenous peoples has become this year's recipient of the Gwangju Human Rights Award, an award commemorating a 1980 pro-democracy movement in the South Korean city of Gwangju, a foundation announced Monday.

The May 18 Memorial Foundation has selected Joanna Carino, who currently leads the Sandugo alliance of indigenous and Moro groups from across the Philippines, as the winner of the award.

Carino, who gave up her professorship to join a people's movement to fight against the government of dictator Ferdinand Marcos, is also a co-founder of the Cordillera Peoples Alliance, a federation of indigenous peoples' organizations in the central mountain region of Northern Luzon, Philippines. It was formally constituted by 27 peoples' organizations during a congress in Bontoc, Mountain Province, in June 1984.

She also serves as the head of the Luzon Chapter of the human rights organization SELDA, a gathering of former political prisoners in the Southeast Asian country.

In February last year, the Philippine government filed a petition before a Manila court against more than 600 individuals, including Carino, labeling them as terrorists for their alleged connection with the Communist Party of the Philippines and the New People's Army. 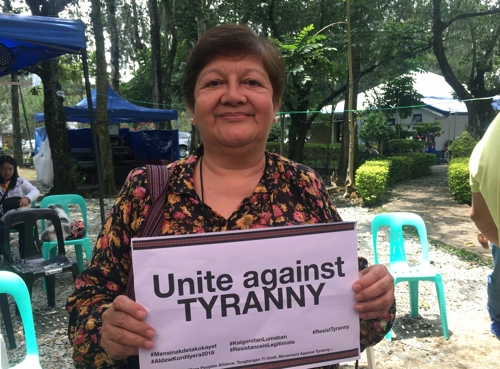 The foundation's committee for the screening of the award's recipient candidates said, "Carino has created a great sensation for her unyielding strife and sacrifice in fighting against suppression and made a favorable impression on many citizens and activists today."

The foundation has also decided to bestow a biennial special award on Indonesia's Dialita Choir, made up of women whose parents, relatives and friends were captured, tortured and exiled during the 1965-1966 communist purge in the Southeast Asian country. The members of Dialita co-initiate social change through singing performances.

The foundation will hold a ceremony on May 18 to give the awards to the Philippine activist and the choir as part of events to mark the 39th anniversary of the democratic uprising. Hundreds of citizens were killed in the southwestern city during protests against the military junta of Gen. Chun Doo-hwan in May 1980.