SEOUL, April 16 (Yonhap) -- Defense technologies of South Korea were assessed to be the world's ninth most advanced as of last year, and about 80 percent of the U.S. levels, a state-run military research agency said Tuesday.

According to the triennial report published by the Defense Agency for Technology and Quality (DTaQ), the comparative level of South Korea's overall defense technology remained at the world's ninth, tied with Italy, among 16 major countries.

The United States topped the list, followed by France, Russia, Germany, and Britain. China was sixth, and Japan and Israel came next.

Of eight technology categories, South Korea retained its highest level in military firepower, or 84 percent of the U.S., but defense modeling/simulation and software showed a relatively poor level with 76 percent, the report showed.

"Improvements to the K9 Thunder self-propelled howitzer and the development of ground-to-air guided weapons, among others, helped pull up our overall defense technology level, though the global ranking remained unchanged due to America's development of superior weapons in diverse fields," the agency said in a release. 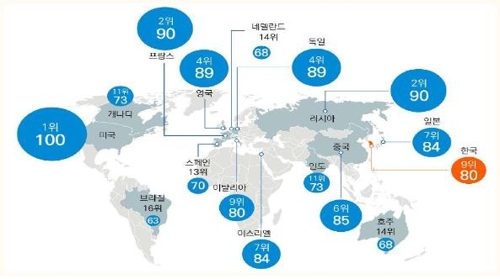