SEOUL, April 16 (Yonhap) -- Police on Tuesday raided the home of Park Yoo-chun, an actor and member of boy band JYJ, as part of their investigation into his alleged drug use.

Investigators from the Gyeonggi Nambu Provincial Police Agency began the search of Park's home in Hanam, south of Seoul, from around 9 a.m. to 11:45 a.m. on suspicion that he took drugs together with Hwang Ha-na, the arrested granddaughter of the founder and honorary chairman of Namyang Dairy Products Co., early this year.

In the surprise raid, 11 police investigators also searched Park's car and mobile phone and collected his hair for drug tests. 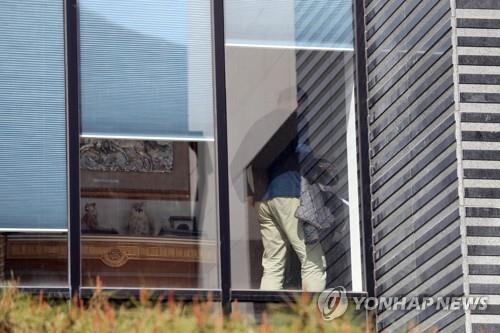 The 33-year-old Park was said to have been at home when the raid began.

Park has faced drug allegations after 31-year-old Hwang was arrested on April 6 on charges of selling methamphetamine and using the illegal substance in 2015 and reportedly confessed to police that an entertainment star was behind her drug-related acts.

Park, who began dating Hwang in 2016, announced plans to marry her the following year. But Park later called off the marriage and the couple separated in 2018.

Tuesday's raid came amid speculation that the police's investigation into records of communication between the two has strengthened the credibility of Hwang's testimony and they have gathered other evidence indicating the truth of the allegations against Park.

Police say they have obtained CCTV footage taken from Hwang's residence that showed Park visiting Hwang at the residence until early this year, despite their breakup.

On Tuesday, the police also said they raided the residence of Hwang in Seoul's Yongsan Ward, where she has resided for about three months.

Park called a news conference last Wednesday and flatly denied all allegations about his drug taking.

Police are expected to summon Park soon after analyzing his mobile phone and other personal belongings secured in the raid.

In this regard, Park and his management agency said the singer plans to appear before police Wednesday for questioning, adding they were embarrassed by the sudden police raid.