SEOUL/INCHEON, April 16 (Yonhap) -- Hwang Kyo-ahn, chief of the main opposition party, said Tuesday he feels a heavy responsibility for the 2014 deadly sinking of a ferry as a ranking official of the former government.

The Liberty Korea Party (LKP) leader also extended an apology to the bereaved families of the victims of the Sewol ferry sinking as the nation commemorated the fifth anniversary of the accident that killed more than 300 people.

Hwang served as the justice minister from 2013-2015 under the conservative government of now-ousted former President Park Geun-hye when the ferry went down in waters off the southwestern coast on April 16, 2014. He later was the government's prime minister from 2015 to 2017.

"As a person who worked under the former administration, I feel a heavy responsibility (for the disaster). I apologize to the bereaved families," Hwang said in a speech at an event to commemorate the fifth anniversary of the disaster held in Incheon, west of Seoul.

With the exact cause for the ferry sinking still unknown, civic groups and the bereaved families are demanding a thorough probe into those who are responsible for the tragedy.

Hwang is one of 13 former government officials that civic groups claimed Monday should be punished for their responsibility for the Park government's botched efforts to rescue the victims.

Hwang told reporters that previous investigations proved that had no accountability in regards to the tragedy.

"Repeating the same story is not helpful in moving forward," Hwang said, when asked about his thoughts about a fresh probe into the case.

But there was no clash and his reading of the speech was not interrupted.

Hwang also apologized to the public for controversial remarks by two LKP members on the bereaved families of the ferry sinking.

The party decided to review whether to punish Rep. Chung Jin-suk and former lawmaker Cha Myeong-jin over their derogatory remarks on the families.

Cha said on his Facebook page that he is fed up with their repeated calls for the truth to be found and their unrelenting condemnation of former President Park and Hwang.

The ruling Democratic Party denounced the politicians and called on the LKP to strip them of party membership. 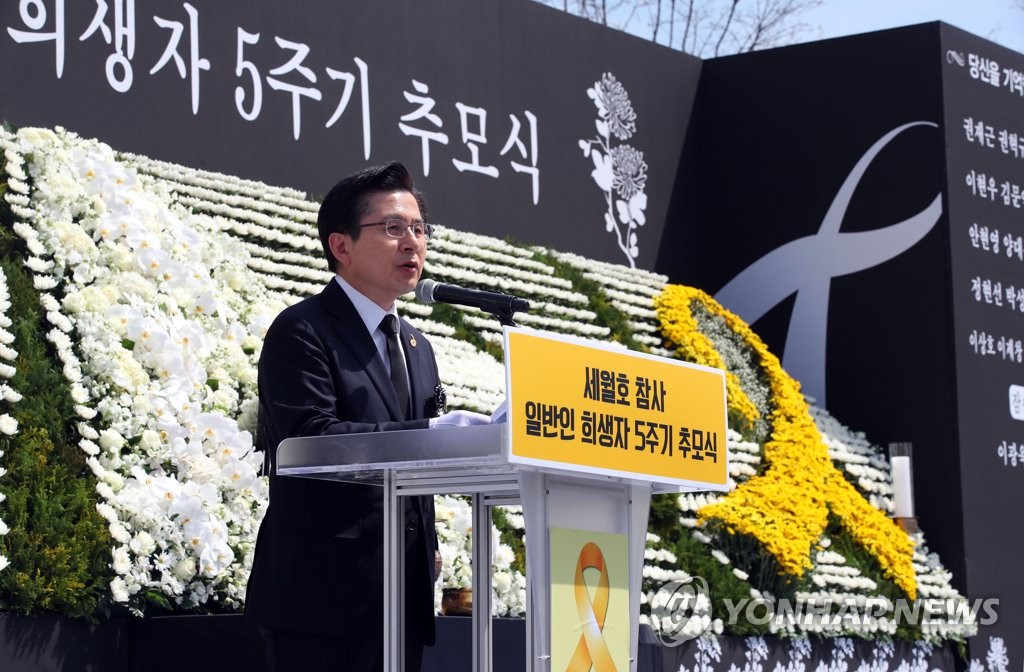