SEOUL, April 16 (Yonhap) -- The fifth anniversary of the sinking of the Sewol ferry was commemorated in memorial ceremonies and events across the country on Tuesday.

In one of the country's worst maritime disasters, the Sewol ferry went down in waters off the southwestern coast on April 16, 2014. The death toll came to 304, including 261 second-year students and teachers of Danwon High School in Ansan, Gyeonggi Province, who were on a field trip to the resort island of Jeju. 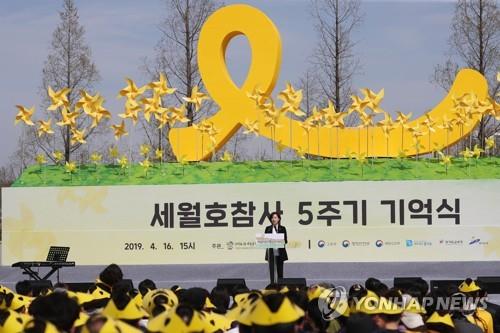 The main memorial ceremony was held at Hwarang Public Garden in Ansan, 50 km south of Seoul, with the attendance of about 5,000 government officials, bereaved family members and citizens.

"Five years have passed but sadness still remains with us. The Republic of Korea has yet to find the true cause for the disaster and the Moon Jae-in government will uncover the truth," Minister Yoo said in an address.

"Our society is changing after the Sewol disaster. The Moon government will always remember the Sewol ferry and strive for a safe nation."

Jang Hoon, a representative of the bereaved family members of the Sewol ferry victims, said the best way to make a safe society is to punish those responsible for the disaster and uncover the truth.

"I lost my eldest son five years ago. I can no longer see, meet and touch my son. I have lived in hell since then," said Jang, calling for the construction of an "April 16 life safety park" in Ansan. 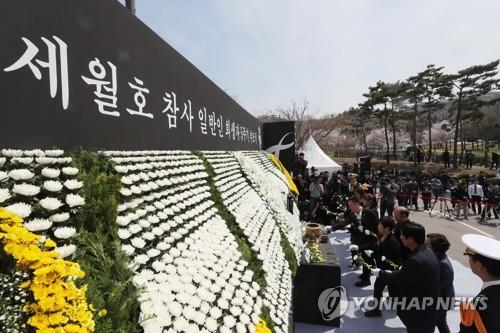 A separate ceremony was held at a public cemetery in Incheon, west of Seoul, in memory of 41 Sewol ferry sinking victims other than Danwon High students and teachers. LKP Chairman Hwang Kyo-ahn attended the Incheon memorial ceremony and promised to make greater efforts for a safe nation in an address.

In other parts of the country, similar memorial ceremonies and other events were held to remember the ferry sinking victims and to enhance public awareness of maritime safety. 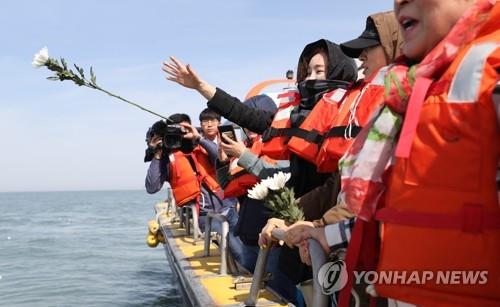 A group of 24 bereaved family members of Danwon High student victims visited the site of the ferry sinking aboard a fishing boat in waters off the southwestern port of Paengmok in Jindo, South Jeolla Province. They called the names of their lost children and threw flowers into the sea.

At the Paengmok port, mourners walked along a Sewol ferry memorial wall and the seawall in the morning to remember each of the sinking victims.

Citizens and teachers held news conferences in Gangwon Province and the southern city of Gwangju to call for a thorough investigation into the disaster.

All staff at the Gangwon Provincial Office of Education held a silent prayer at 10 a.m. before singing a memorial song and reading a memorial poem.

Students at most elementary and secondary schools in Busan also held a silent prayer at 10 a.m., while the Gyeongsangnamdo Office of Education issued a pledge to enhance safety in schools. 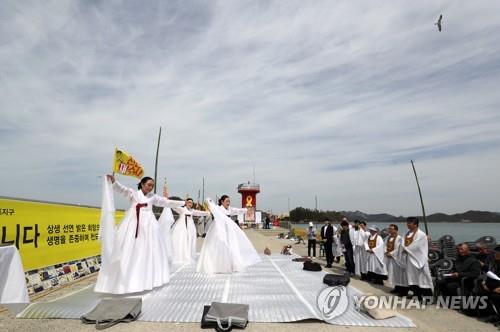 On Jeju Island, the destination of the sunken ferry, mourners held a memorial ceremony in the center of the city of Jeju and marched towards its port, where they met with survivors of the disaster and bereaved families to jointly call for uncovering the truth behind the ferry sinking.