JINJU, South Korea, April 17 (Yonhap) -- A man in Jinju, southeastern South Korea, set his apartment aflame on Wednesday and attacked fleeing residents with a knife, killing five of them and injuring 13, police said.

The arson and murder suspect, identified only as a 42-year-old man, set fire to his apartment building in Jinju, about 435 kilometers southeast of Seoul, at around 4:29 a.m. before randomly stabbing other residents coming out of their houses to evacuate, police said. 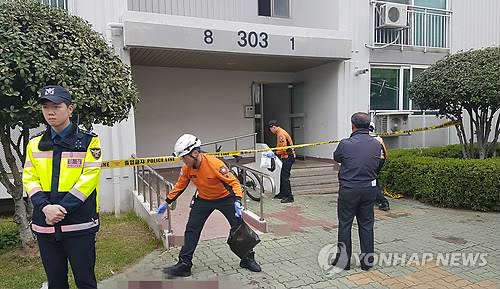 Five residents, including a 12-year-old, were stabbed to death in the apartment stairways, and 13 others were injured, with three of them in critical condition, police said.

The suspect was detained on the scene at about 4:50 a.m. after a confrontation with police.

He reportedly told police he committed the crimes out of grievances about his overdue wages.

Police said the suspect was not intoxicated at the time of the crime.

The fire was extinguished by firefighters about 20 minutes later.

The detention of the suspect came after a resident called a 112 police emergency line to report witnessing a man wielding a weapon against residents fleeing from fire.

Police said they will conduct further investigation into the suspect's occupational and health records, as well as his motives for his crimes.