JINJU, South Korea, April 18 (Yonhap) -- The arson and murder suspect, who set his house aflame and stabbed five evacuating residents at an apartment building in Jinju, southeastern South Korea, reportedly committed the crimes out of his personal resentment toward society, investigators said Thursday.

The 42-year-old suspect, identified only by his family name Ahn, was detained soon after his arson and stabbing rampage left five residents dead and 15 others injured in Jinju, about 435 kilometers southeast of Seoul, on Wednesday.

According to investigators at the Jinju Police Station on Thursday, Ahn said he committed the crimes out of anger after having been disadvantaged socially and by his former employers and hospitals. 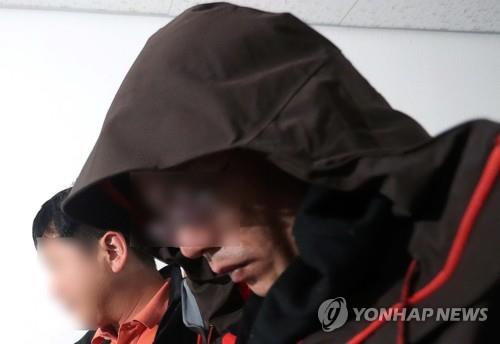 The suspect also claimed that some people spied on him through illegally installed surveillance cameras and dumped garbage and insects into his house, while every apartment resident provoked him.

Pointing to Ahn's unfounded claims of damage inflicted by his neighbors, a police investigator speculated he may have gone on the deadly rampage after suffering from a persistent persecution complex.

At one moment during police questioning, Ahn reportedly offered an apology for the "serious problem" he caused.

Police earlier said they have secured testimonies from his neighbors and others that the suspect has a history of schizophrenia.

But police said Ahn's crimes appear to be premeditated, as he bought two big knives used in Wednesday's murders -- 34 centimeters and 24 centimeters, respectively, in length -- about two to three months ago. He also bought a bottle of gasoline from a neighborhood gas station about four hours before setting his apartment on fire.

Police said they have requested an arrest warrant for Ahn and a district court in Jinju is to start reviewing his case Thursday.

According to Ahn's neighbors, the suspect had in the past year gone on several rampages, including throwing human excrement in front of other houses and in elevators, and hurling expletives at other residents. Some residents had previously reported Ahn's bizarre and violent behavior to the police, but no countermeasures were taken.