SEOUL, April 18 (Yonhap) -- Samsung Electronics Co. said Thursday it has retrieved Galaxy Folds given to some early reviewers in the United States to look into their claims that some units broke.

Samsung provided a limited number of the device to media for review ahead of its launch for April 26 in the U.S., but some journalists said the new device that costs nearly US$2,000 broke after just a few days of use.

"We will thoroughly inspect these units in person to determine the cause of the matter," Samsung said in a statement. "Separately, a few reviewers reported having removed the top layer of the display, which caused damage to the screen."

Samsung said the main display on the Galaxy Fold features a top protective layer, which is part of the display structure designed to protect the screen from scratches.

"Removing the protective layer or adding adhesives to the main display may cause damage. We will ensure this information is clearly delivered to our customers," the company said.

The new phone features a 7.3-inch display, which folds into a compact device with a separate 4.6-inch cover display.

Samsung said it invented a new polymer layer and created a display that is around 50 percent thinner than the typical smartphone display. The new material makes the Galaxy Fold flexible and tough, and built to last, it noted. 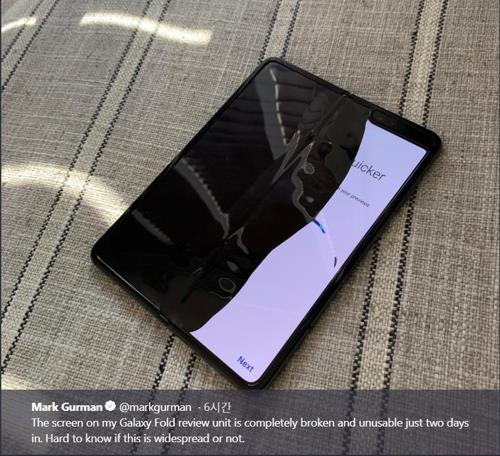