SEOUL, April 18 (Yonhap) -- The Ministry of Environment has filed a complaint against two SK Group companies and their employees with prosecutors, accusing them of concealing crucial research results that indicate the toxicity of their raw materials for humidifier sterilizers, prosecution officials said Thursday.

The ministry's complaint against SK Chemicals Co. and SK Innovation Co. and their employees was submitted to the Seoul Central District Prosecutors' Office last Friday, the officials said. 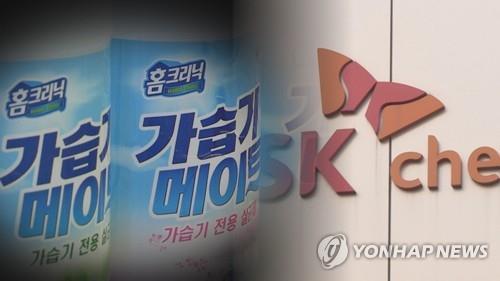 In the complaint, the ministry claimed the SK companies and employees attempted to destroy key evidence in the unfolding humidifier sterilizer scandal by failing to mention results of a 1994 study suggestive of the potential toxicity of sterilizer raw materials during a raid by ministry officials last year.

SK Chemicals, which was renamed SK Discovery in a groupwide restructuring in 2017, manufactured key ingredients of humidifier sterilizers supplied to Oxy Reckitt Benckiser Korea and Aekyung Industrial, whose disinfectant products caused the deaths of about 100 consumers in South Korea.

Between 2006 and 2011, 73 people, including children and a pregnant woman, died of pulmonary disease, with a total of 181 consumers affected by the toxicity of a humidifier disinfectant sold by Oxy. The Supreme Court confirmed a six-year prison term for former Oxy chief Shin Hyun-woo last year on charges of accidental homicide due to professional negligence.

Aekyung's Humidifier Mate produced between 2002 and 2012 with raw materials supplied by SK Chemicals was accused of making 128 consumers sick and killing 27 of them.

SK Innovation is an energy and chemical affiliate of SK Group.

According to ministry and prosecution officials, SK Chemicals and SK Innovation are additionally accused of failing to notify the environment ministry of the results of a toxicity test conducted in 1994 on their own humidifier cleaner products.

The SK companies began to sell their humidifier sterilizer products in 2000, although there were no studies that could sufficiently prove their harmlessness.

SK Chemicals submitted parts of its 1994 research papers on the toxicity of humidifier cleaner raw materials to the prosecution early this year. But the company was accused of concealing them during a visit by environment ministry inspectors last year.

Under a special law on humidifier sterilizers, anyone who makes false statements or submits fabricated data and materials to the authorities can be punished by an imprisonment of less than one year or a fine of less than 10 million won (US$8,800).