SEOUL, April 18 (Yonhap) -- The chief of the Bank of Korea ruled out the possibility of a rate cut in the near term after leaving its policy rate unchanged for this month, but analysts were divided over the chance of a dovish step this year.

Some analysts said the BOK would have no choice but to administer a bracing tonic to the South Korean economy if an extra budget of less than 7 trillion won (US$6.2 billion), which is set to be submitted to the National Assembly later this month, fails to revive growth momentum.

But others said a rate cut is unlikely to happen this year as the government prioritizes control of mounting household debt and cooling home prices in key regions.

Expectations of a rate cut later this year have been mounting and the central bank omitted a phrase from its April policy review statement that, "It will judge whether to adjust the degree of monetary policy accommodation further."

Dropping the phrase was widely interpreted as a sign that the central bank could take a dovish stance in the near term. 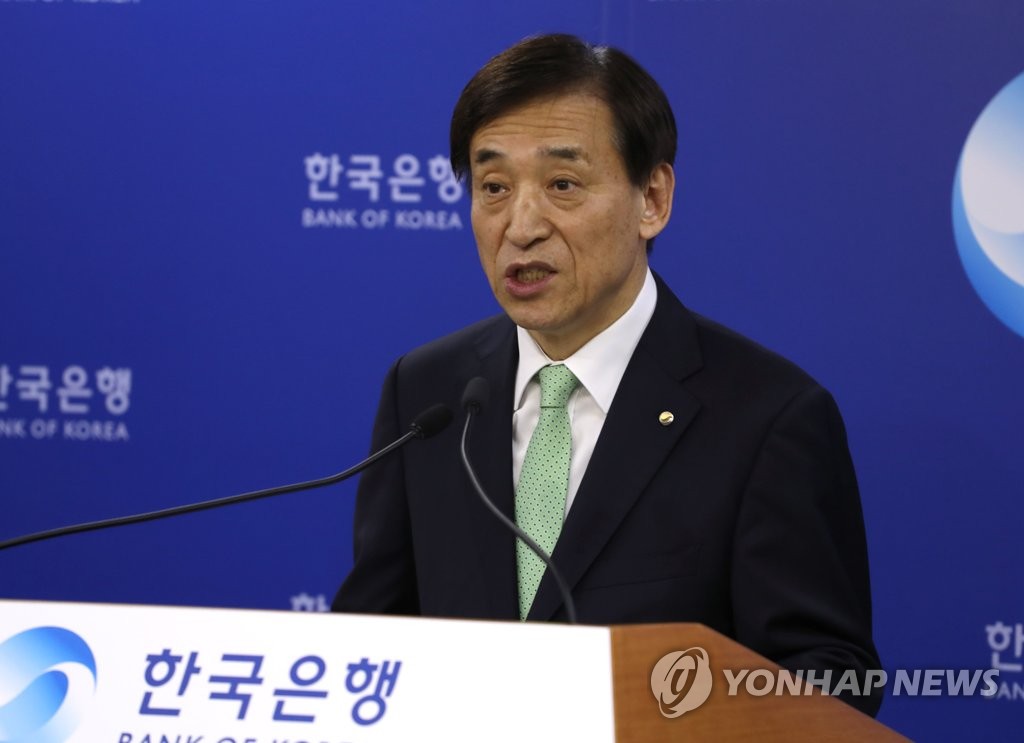 However, BOK Governor Lee Ju-yeol cautioned against reading too much into the change in this month's statement, saying that it means there is no overall direction of monetary policy.

Lee said the central bank omitted the phrase because there is a need to make a policy decision after closely watching the trend of external uncertainties, growth and inflation.

The central bank is "not reviewing a rate cut at all" and the overall direction of a monetary policy will be decided in consideration of developments of economic factors at home and abroad, Lee said.

As widely expected, the central bank kept its key rate at 1.75 percent for April earlier in the day, while trimming its growth forecast for this year.

The bank expects South Korea's economy to grow 2.5 percent this year, slightly down from its earlier forecast of 2.6 percent expansion. Inflation target for this year was also revised down to 1.1 percent from 1.4 percent.

Exports, the main engine for South Korea's economy, fell for the fourth straight month in March. Outbound shipments came to US$47.1 billion for March, down from the $51.3 billion a year earlier, according to government data.

Export growth is expected to continue to slow this year as fears of a recession are haunting the global economy.

"Unless the trade dispute between the U.S. and China is resolved soon, the downward momentum of the Korean economy will accelerate," Lee Keun-tae, an economist at LG Economic Research Institute, said.

"If that's the case, I think that the Bank of Korea will cut the key rate in the second half of this year," the economist said.

Last November, the central bank raised the rate by a quarter basis point, marking its first tightening in a year. It was mainly aimed at cooling the property market, despite a slowdown in the overall economy.

Yoon Yeo-sam, a fixed-income analyst at Meritz Securities, disagreed on the chance of a rate cut, saying "The Bank of Korea raised the key rate last November, by taking into consideration a financial stabilization, even though the economy was not good."

"It would be difficult for the Bank of Korea to cut the key rate, given the rising household debt," Yoon said.

In the fourth quarter of last year, however, household credit rose 5.8 percent on-year, marking the slowest increase since the second quarter of 2014, thanks to the government's tightened lending rules.

Earlier in the day, the ruling Democratic Party said it will spare no efforts to win parliamentary approval for the extra budget scheme next month.

Gov. Lee said the extra budget did not affect the central bank's downgrade for this year's growth forecast because the final size of the budget has not been confirmed yet.

The International Monetary Fund has recommended that South Korea needs an extra budget of some 9 trillion won to achieve its growth target.