A senior North Korean foreign ministry official made the demand, claiming that whenever Pompeo "pokes his nose in, talks between the two countries go wrong without any results even from the point close to success," according to the Korean Central News Agency.

"I am afraid that, if Pompeo engages in the talks again, the table will be lousy once again and the talks will become entangled," Kwon Jong-gun, director general of the ministry's American affairs department, told KCNA.

"Therefore, even in the case of possible resumption of the dialogue with the U.S., I wish our dialogue counterpart would be not Pompeo but (an)other person who is more careful and mature in communicating with us," he added. 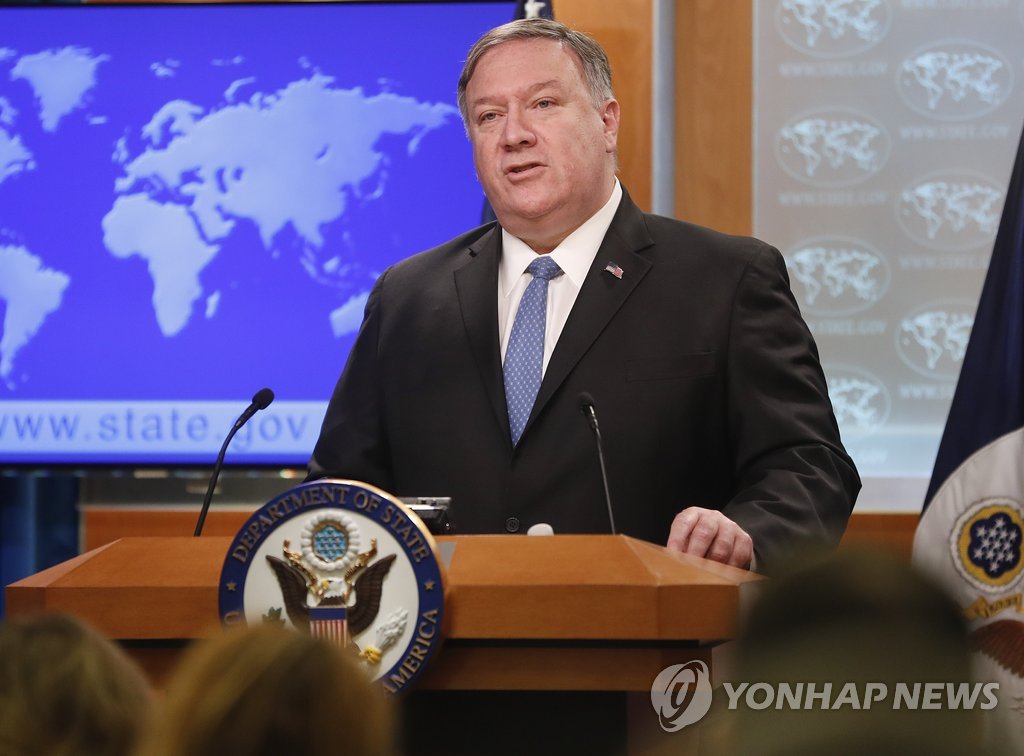 Experts say that the North's demand for Pompeo's replacement is aimed at sending a warning message to Washington not to create any more obstacles before any resumption of their stalled denuclearization talks.

Nuclear talks between the U.S. and North Korea have been stalled since February's summit between U.S. President Donald Trump and North Korean leader Kim Jong-un ended without an agreement due to differences over how to match Pyongyang's denuclearization steps with Washington's sanctions relief.

The North Korean official accused Pompeo of misinterpreting a remark leader Kim made during his policy speech last week at the Supreme People's Assembly. Kim expressed a willingness to hold a third summit with Trump and said he will wait "in patience" till the end of this year to see whether the U.S. makes a "courageous decision."

"Everyone has a clear interpretation of his speech which says that the U.S. should change its way of calculation and come up with responsive measures before the end of this year," Kwon said.

"Just at this time, only Pompeo, U.S. Secretary of the State, is talking nonsense that its meaning is to finish the working level negotiation between the DPRK and the U.S. by the end of the year, which subjects him to public ridicule," he added, using the abbreviation for the North's official name, the Democratic People's Republic of Korea.

He was apparently referring to Pompeo's remarks on Monday concerning Kim's speech in which the U.S. official expressed hope of seeing North Korea's denuclearization before the end of this year.

"I would like to take this opportunity to make clear once again to Pompeo the meaning of the stand towards the U.S. clarified by our Comrade Chairman of the State Affairs Commission in his policy speech," Kwon said.

"The meaning is that the U.S. should get rid of the root cause that pushed us into a nuclear state and obstacles on the way to denuclearization by its own hands; otherwise no one can predict how the situation on the Korean peninsula will turn out," he added.

Kwon still emphasized the good relations between Kim and Trump.

"While Pompeo is fabricating stories after his own taste and trying to raise his publicity stunt at the sacrifice of the DPRK-U.S. relations as a whole, it is fortunate that the personal relationship between our Chairman of the State Affairs Commission and President Trump is on good terms as usual and our Chairman is pleased to get on well with President Trump," he said.

Experts say the North's demand for Pompeo's replacement is not so much aimed at ridding him from Washington's negotiating team as at sending a warning message not to create any obstacles before resuming their negotiations.

"Had North Korea really wanted his replacement, it would have made such a demand in the name of higher-ranking officials. It appears North Korea is sending a warning message not to create any uncomfortable situations before resuming talks," Lim Eul-chul, a professor at the Institute for Far East Studies at Kyungnam University, said.

"It also suggests that the North is really willing to resume talks with the U.S. Who would demand the replacement of its counterpart if he or she does not want to talk at all?" he said.