"No. 1 focus area (of the UNC) right now is the successful implementation of the comprehensive military agreement," UNC Deputy Commander Lt. Gen. Wayne Eyre told reporters visiting its headquarters at Camp Humphreys in Pyeongtaek, some 70 kilometers south of Seoul.

Noting that he in person feels that tension inside the Joint Security Areas (JSA) "is nowhere near the same as it was," Eyre said the UNC "works tirelessly" for its role of facilitating dialogue that leads to lasting peace.

Established in 1950 under a U.N. mandate in response to North Korea's military provocations, the U.S.-led UNC has played a role as the enforcer of the armistice agreement that halted the 1950-53 Korean War. It is currently led by Gen. Robert Abrams. 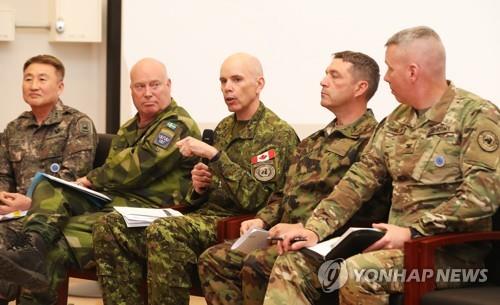 The UNC has also been supportive of Seoul's plan to open three public hiking trails leading to the Demilitarized Zone (DMZ), the deputy commander said, though some of its details could change in line with natural and security circumstances of each region.

"Our primary consideration, our primary concern, is the safety and security of any citizens who will be on these peace trails, because it's done within the DMZ which is under the authority of the UNC commander," Eyre said.

Speaking of the planned free movement of visitors inside the JSA, the UNC is considering its partial opening, according to Eyre.

"Right now, we are looking at opening tours south of the military demarcation line in the new demilitarized JSA. This will be done as an interim step until a code of conducts (among the two Koreas and the UNC) is agreed to," Eyre said.

Last year's military accord called for allowing Koreans and foreign tourists to cross the demarcation line inside the JSA from 9 a.m. to 5 p.m. once the disarmament and related procedures were complete that year. But Pyongyang has been dragging its feet in its implementation, demanding the exclusion of the UNC from the JSA management.

"It is no secret that North Korea would like to bypass and see the UNC disband, but I look at it from different perspectives. What we have is (an) opportunity" to build trust towards peace, the deputy commander stressed.

The inter-Korean military agreement entails a series of trust-building and arms control measures under a broader scheme to halt all hostile acts against each other.

But there has been a lack of progress in moving the agreement forward in recent months due to apparent yawning gaps between Washington and Pyongyang over how to denuclearize the Korean Peninsula.

Touching on the issue of the envisioned handover of the wartime operational control (OPCON) from Washington to Seoul, he dismissed speculations of possible changes to its future role or status.

"I've got several questions over the last few months about what changes for the UNC with the OPCON transfer. And for us, it is nothing. We still support the (ROK-U.S.) Combined Forces Command with the UNC forces whether it is a ROK or U.S. commander," the officer said.

The media event held on the day, meanwhile, was the first of its kind organized by the UNC, with Eyre saying that it aims at boosting "transparency."

The UNC also gave media a chance to take a glimpse at its headquarters inside the sprawling complex in Gyeonggi Province for the first time since being relocated from Seoul's Yongsan in June last year. 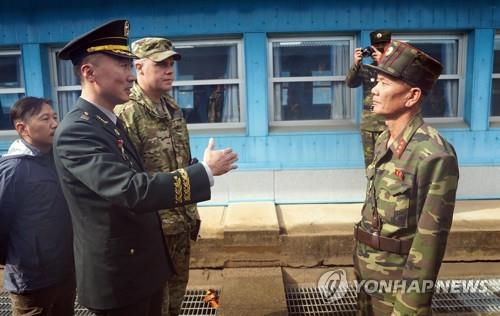