SEOUL, April 22 (Yonhap) -- K-pop boy band BTS has scored its third No. 1 on the main Billboard 200 album chart, becoming the first group since the Beatles to earn three No. 1s in less than a year, Billboard said.

"Map of the Soul: Persona," BTS' latest seven-track album released April 12, debuted atop the Billboard 200 for the week of April 27, the website of the music magazine said Sunday (U.S. time), officially confirming the result after it reported last week that the band was "bound for No. 1."

In the week ending April 19, BTS earned 230,000 equivalent album units in the United States, including 196,000 in album sales and 26,000 in streaming equivalent albums, Billboard said, citing data from Nielsen Music.

It was the band's "career-best week," it said.

The Billboard 200 and other charts will be fully updated on the Billboard website Tuesday. 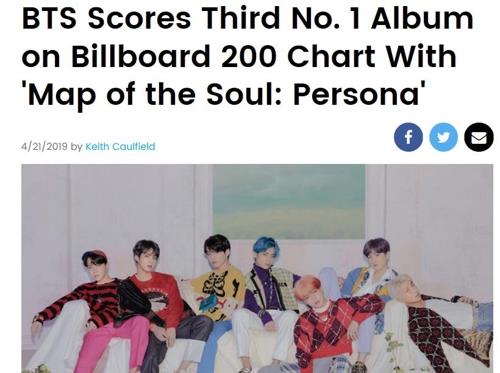 "Persona," the opener of the new BTS album series "Map of the Soul," is the band's third Billboard No. 1 album in nearly 11 months. The band took its first No. 1 with "Love Yourself: Tear" in June last year before the following album "Love Yourself: Answer" again conquered the chart in September.

This massive feat makes BTS the "first group since the Beatles to earn three No. 1s in less than a year," Billboard said.

"Before BTS, the last traditional group (excluding the Glee ensemble, whose multiple cast members rotated) to log three leaders within such a quick span was the Beatles in 1995-96, when the band's archival releases 'Anthology 1,' 'Anthology 2' and 'Anthology 3' all debuted at No. 1 in a stretch of 11 months and a week," it said.

The Korean language-recorded "Persona" is also the fourth non-English album ever to top the prominent album chart in the course of the past year, according to Billboard. The aforementioned "Love Yourself" albums are two of the other three records that previously led the chart over the past year.

"'Persona' likely got a boost in sales from devoted fans who purchased multiple CD copies of the album, as it was released in four different collectible packages," Billboard said.

The music video of "Boy With Luv," featuring American diva Halsey, became the fastest YouTube video ever to garner 100 million views, surpassing the milestone in less than 38 hours.