(ATTN: UPDATES with reports of joint press conference by the leaders in paras 7-11; ADDS additional photo)

NUR-SULTAN, April 22 (Yonhap) -- South Korea and Kazakhstan will work to boost their economic ties by developing new areas of cooperation that also help them jointly prepare for the Fourth Industrial Revolution, the countries' leaders said in a meeting here Monday.

"Also, they noted that trade between the two countries came to US$2.2 billion last year, growing 220 times since 1992, and that the number of visitors between the countries reached a record high of 90,000," Moon's presidential office Cheong Wa Dae said in a press release. 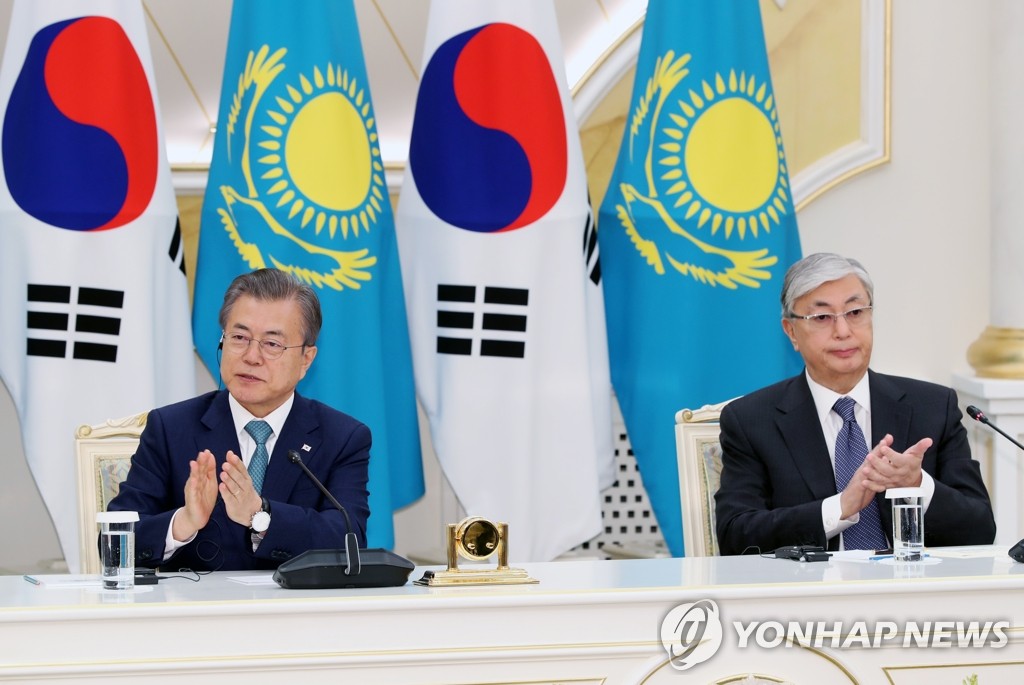 Tokayev expressed his gratitude to Moon for visiting his country at what he called an important time of political transition, it added.

Moon expressed hope for increased cooperation with the Central Asian country while explaining his New Northern Policy that seeks to boost South Korea's economic and diplomatic cooperation with its Asian and Eurasian neighbors, including Russia.

"Now Kazakhstan is stepping up its efforts to become one of the world's 30 advanced nations by 2050 under its national development strategy, Kazakhstan-2050. South Korea too is pushing for its New Northern Policy with an aim of ensuring peace and joint development of Eurasia," Moon told a joint press conference with Tokayev after their summit.

"Today we two leaders discussed ways to further deepen and develop the countries' relationship by combining their policies," he added.

To this end, the two leaders agreed to increase the countries' future-oriented cooperation and boost their people-to-people exchanges.

They will also work together to promote peace and prosperity on the Korean Peninsula and in Central Asia, Moon said.

"Today, President Tokayev welcomed our government's efforts for peace on the Korean Peninsula and said he will continue to actively support our efforts in the future," Moon told the joint press conference.

The leaders welcomed a new agreement, signed by the countries' commerce ministries shortly after their summit, that calls for "Fresh Wind" or fresh cooperation between the countries.

"While welcoming the signing of the new cooperation program, Fresh Wind, aimed at expanding the scope of cooperation between the two countries, the two leaders expressed hope the countries' cooperation will be diversified into areas including customs, infrastructure, health and medical care, tourism and small and medium-sized businesses," Cheong Wa Dae said.

The agreement on fresh cooperation was one of about 20 new agreements, including an extradition treaty, signed on the sidelines of the summit. 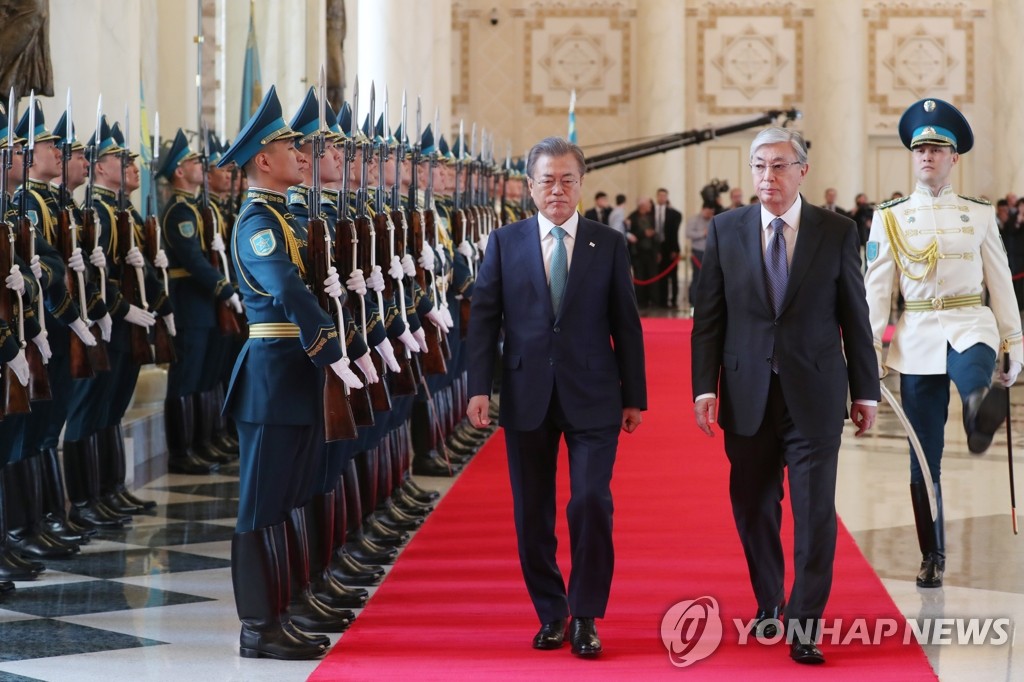 The leaders called for special efforts to jointly prepare the countries for the Fourth Industrial Revolution that will include joint development of new advanced industrial sectors including ICT, 5G and Internet of Things.

Also, the two agreed to further expand people-to-people exchanges between their countries, partly by designating 2022 as the year of cultural exchange that will also mark the 30th anniversary of the establishment of diplomatic ties between the countries.

Moon also sought Kazakhstan's support for his efforts to denuclearize the Korean Peninsula.

Tokayev said his country actively supports the peace process and will continue to help in any way possible.

Moon will wrap up his visit here Tuesday to head home, also concluding his eight-day, three-nation tour of Central Asia that earlier took him to Turkmenistan and Uzbekistan.