In December, Japan claimed that a South Korean warship locked fire-control radar on its maritime patrol aircraft in the neighbors' overlapping exclusive economic zones, but Seoul has said the warship never used any tracking radar as it was on a mission to rescue a North Korean fishing boat that was drifting in the East Sea.

Japan's Yomiuri Shimbun reported on Monday that the Seoul government in January outlined for Japan Seoul's radar operation guidelines while warning that South Korea would direct its radar at Japanese planes if they come as close as 3 nautical miles, or around 5.5 kilometers.

"We've not revealed any of our military manuals, including detailed operational procedures, to Japan," an official at the Seoul ministry said.

Such a news report appears to be caused by misunderstandings about Seoul's warnings to the Japanese side at the height of the conflict, he noted.

"In order to prevent any possible accidental naval clashes between the two sides, we stressed our policy stance and possible military responses in case of any recurrence when a defense attache from the Japanese Embassy in Seoul was called in," he said.

While noting that its operational manuals are more precise and specific, another Seoul military officer said Seoul made it clear in January that a warning message can be sent ahead of a radar operation in case of low-altitude flybys within 3 nautical miles by any maritime aircraft "which is in accordance with universal, international practices."

"We once again call for Japan to stop such menacing activities and come up with measures to prevent a recurrence," he added.

The defense ministry also expressed regret over Japan's unilateral disclosure of the fact that the two sides held a bilateral closed-door working-level meeting earlier this month, where Tokyo asked for the withdrawal of such a stance, a demand rejected by Seoul.

Following last year's incident, the South Korean military authorities beefed up their response manuals "in a more detailed manner," according to officials.

The radar row significantly soured military relations between the two countries, but there have been signs of improvement in recent weeks as officials of the two nations reportedly met earlier this month to discuss the agenda for next month's annual trilateral security talks also involving the United States. 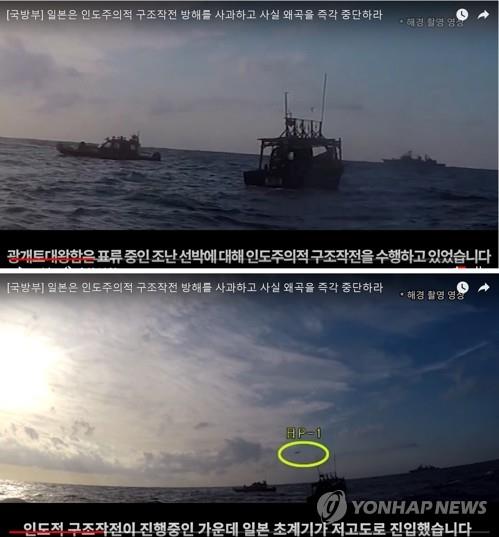