SEOUL, April 22 (Yonhap) -- The Cannes-nominated Korean film "Parasite" is full of cinematic details and nuances specific to Koreans but its universal theme of class division will strike a chord with foreign audiences as well, director Bong Joon-ho said Monday.

The organizers of the Cannes Film Festival announced last week that "Parasite" will compete with 18 other movies from all around the world for the highest prize the 72nd edition of the festival, slated for May 14-25.

Social class division and family dynamics, subjects broadly dealt with in his previous films, including "The Host" and "Snowpiercer," again feature prominently in "Parasite," which will hit local screens sometime in May.

The scenario of "Parasite," written by the director himself, started from an initial idea in 2013. "What would happen if two families that come from extremely different environments and are highly unlikely to come across each other actually meet?" Bong said in a press conference announcing the release of the film. 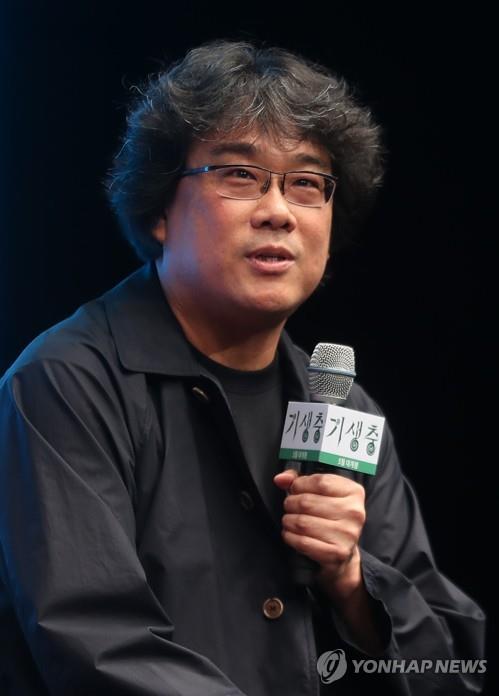 "The film was referred to by its working title for about one year after 2013 -- 'Decalcomanie.' (It is) a story of two different families, one very rich and the other the opposite, coming across each other in a very unique environment," the director said.

Song Kang-ho, arguably South Korea's best ticket-selling actor of today and who collaborated with Bong in "Snowpiercer," "The Host" and "Memories of Murder," plays Ki-taek, the chronically unemployed father of the impoverished family, while Lee Sun-kyun plays the very rich, successful head of the other family.

The two families meet each other after Ki-taek's son uses a forged university diploma to become a highly paid private tutor for the rich family.

Bong described the film as "a tragicomedy dealing with the laughter, the horror and the sorrow of human beings living together."

"I hope that this movie could be one that provokes all kinds of different thoughts," the director said. The metaphors in "Parasite" reveal themselves in a wide range of ways, he noted.

"Parasite" is Bong's fifth film to be screened at the Cannes Film Festival, including his controversial Netflix movie "Okja."

"I am honored and nervous. ... (The Cannes Film Festival) is a place that is exciting, new and tense no matter when I go," he said.

"But foreigners, I think, would not be able to grasp (the significance of) the film 100 percent. It's such a Korean film, filled with details and nuances that could only be understood 100 percent when Korean audiences see it," Bong asserted.

For Song, the latest collaboration with Bong reminded him of their previous joint work in "Memories of Murder," filmed 16 years ago.

"Director Bong is someone who continuously challenges himself to come up with an imaginative, insightful film," the master actor said.

"I cautiously think that 'Parasite' is a film that could display surprising progress of the Korean cinematic world," he noted.

Choi Woo-shik, a young rising actor who played a supporting role in "Okja," appears as the son of Ki-taek, while Park So-dam plays his no-nonsense daughter.

Asked how likely "Parasite" is to win at the Cannes Film Festival, Bong was jokingly dismissive.

"The possibility is not high because (the competition) includes films by the immensely great directors I have admired since I started to learn cinema at university," he said. "But the possibility of the actors winning at the event is high," he said.

"I might sound self-contradicting, having said that foreigners may not fully understand the Korean nuances and details in the film. But the flip side of it is that the extremely different backgrounds of the two families mirror the globally universal gap between the rich and the poor," the director said. "I think this universal quality could strike a chord with foreign audiences within a single minute of the film's beginning." 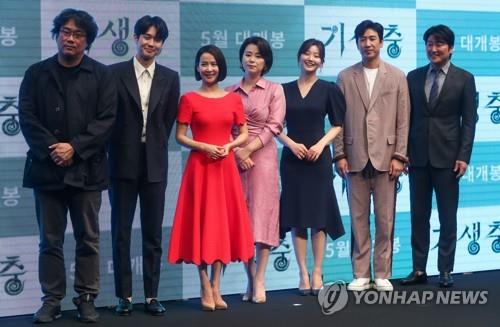