SEOUL, April 22 (Yonhap) -- Politicians from both ruling and opposition camps and top government officials visited the mortuary of the late Kim Hong-il in large numbers Monday to pay their last respects to the eldest son of former President Kim Dae-jung.

Kim Hong-il, who was elected to the National Assembly three times, died at his home in western Seoul on Saturday at the age of 71. He was known as the most beloved son of Kim Dae-jung, who died in 2009 after serving as president from 1998-2003 and is still widely respected in South Korean politics for his lifelong commitment to fighting for democracy and improving inter-Korean relations.

A stream of mourners, mostly politicians and government officials, visited the memorial altar of Kim Hong-il set up at Severance Hospital in western Seoul. Two younger brothers of the late politician and other bereaved family members received the mourners. 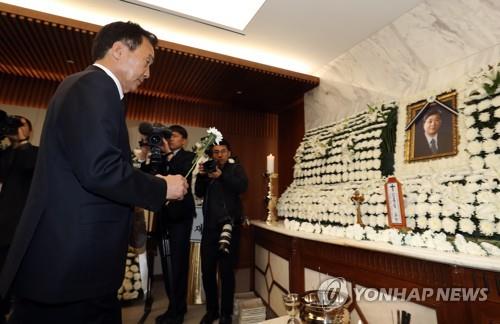 Sohn Hak-kyu, the chief of the minor opposition Bareunmirae Party, and other party leaders visited the hospital in the morning after finishing a party meeting at the National Assembly.

"My heart is broken whenever I think of former lawmaker Kim, because he had been unable to work and lived almost as a vegetable due to the aftermath of torture," Sohn said.

"He had fought against military dictators for the nation's democratization together with his father, former President Kim Dae-jung. He had played a big role in the development of our country's politics and political parties."

Lee Jeong-mi, leader of the Justice Party, said the late Kim deserves the condolences of many people, as he had lived a painful life to safeguard democracy.

Hwang Kyo-ahn, chairman of the main opposition Liberty Korea Party (LKP), also visited the mortuary of the late Kim, along with party lawmakers. 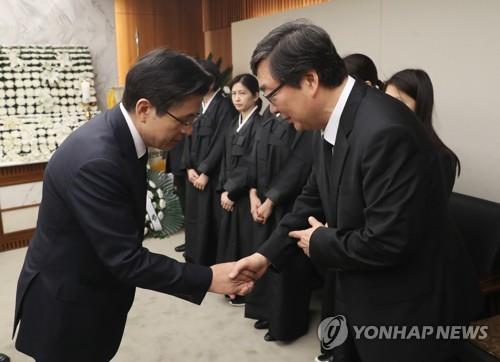 Other renowned politicians who personally paid their respects to the late Kim included Rep. Kim Boo-kyum of the ruling Democratic Party and Rep. Chung Jin-suk of the LKP.

Chung Dong-young, leader of the minor opposition Party for Democracy and Peace, and senior party lawmakers visited Severance Hospital for the second consecutive day to mourn the death of Kim.

Kim will be laid to rest at the May 18th National Cemetery in Gwangju, 330 km south of Seoul, after a funeral service on Tuesday.