SEOUL, April 23 (Yonhap) -- A South Korean government helicopter briefly violated the border with North Korea during a mission to put out a forest fire, the Joint Chiefs of Staff (JCS) has said.

The helicopter affiliated with the Korea Forest Service accidentally flew around 1.7 kilometers north of the inter-Korean military demarcation line at around 6:09 p.m. on Monday while trying to extinguish the fire in the border town of Hwacheon, Gangwon Province, according to the JCS.

One minute later, the helicopter returned to the South, it added.

"The military instantly notified North Korea of the incident, which was unintentional and accidental, and reported the issue to the United Nations Command," the JCS said.

In order to prevent any recurrence, the JCS vowed to come up with measures in close cooperation with ministries concerned.

According to the authorities, the fire broke out at around 3:42 p.m. in the border town and came under control about two hours later. The exact cause of the fire is yet to be identified. 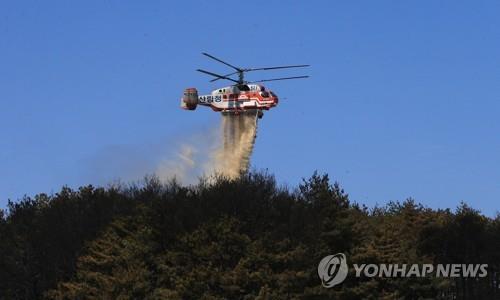