Four parties on Monday reached a package deal on the adoption of a new proportional representation election system, the establishment of the investigative unit and enhancing the police's authority to conduct probes.

Earlier in the day, they approved the agreement at their respective meetings with lawmakers, clearing a big hurdle for the deal to be fast-tracked.

Special parliamentary panels on political and judiciary reforms are expected to designate them as fast-track bills on Thursday, party officials said.

The National Assembly can designate a bill that fails to get bipartisan support for a long period due to wrangling as a fast-track proposal if three-fifths of lawmakers approve the move. This is aimed at preventing a proposal from remaining pending in parliament too long.

Once a bill is put on a fast track, it can be put to a vote at a plenary session without deliberation or approval by the relevant committees.

But if political parties fail to reach a bipartisan agreement, the fast-track bill must be voted on before a maximum of 330 days have passed following its designation.

Even if the fast-track designation is made, it is still uncertain whether those bills could be passed as the main opposition Liberty Korea Party (LKP) vehemently opposes the move.

For the ruling party, a political burden is piling up ahead of the 2020 general elections as the election law has been revised through bipartisan agreement.

"If the DP does not intend to scuttle the National Assembly, it should immediately suspend the attempt to fast-track an election reform bill and come to negotiations in a good faith," the LKP said.

The four parties agreed to introduce a mixed-member proportional (MMP) representation system in which parliamentary seats are tied to the percentage of voters' support rates for parties, but they will operate it in a less strict manner.

President Moon Jae-in has put a priority on reforming the prosecution. As part of such efforts, the government has been seeking to empower police to initiate and close cases without approval from the prosecution.

Under Monday's deal, an independent investigative unit, if established, will not be given extensive authority for indictment. But it will be able to file charges against judges, prosecutors and high-ranking police officers, an institutional tool that can keep prosecutors in check.

The justice ministry welcomed the parliamentary move, saying it will do its best to help drive the reform of the prosecution in a desirable way.

Cho Kuk, a senior presidential secretary for civil affairs who is in charge of the prosecution reform, also hailed the four parties' approval. 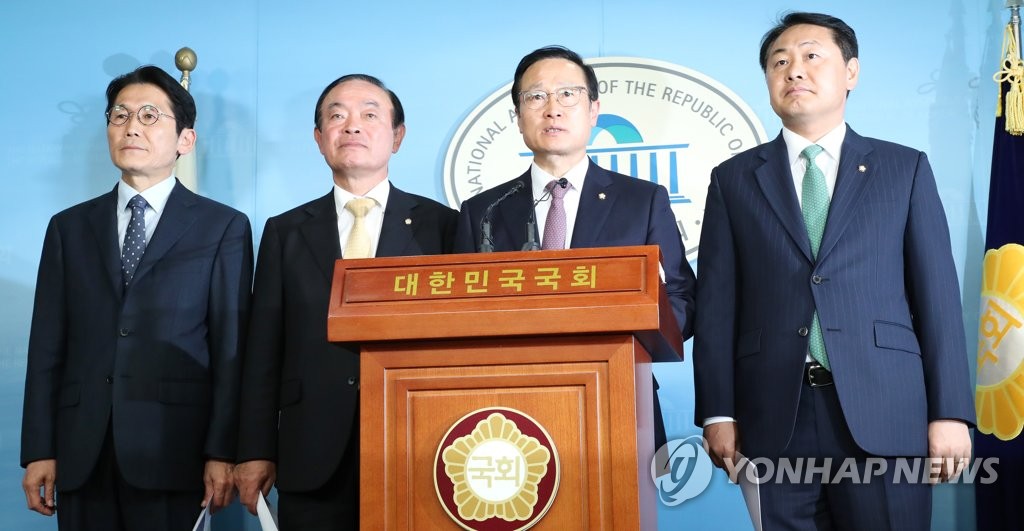