The company said it will operate a container ship with a capacity of 1,000 twenty-foot equivalent units (TEU) for the Korea Russia Service 2 line that directly connects South Korea's southern port of Busan and Vostochny, a major port city in the Russian Far East. TEU is a measurement of a ship's cargo capacity.

FESCO will deploy a 1,200-TEU vessel for the Korea Russia Service route that sails between Busan and Vladivostok, with the first voyage scheduled for next month as well.

HMM has been co-operating the China Russia North (CRN) Service with FESCO and France-based CMA-CGM that connects major ports in China, South Korea and Russia.

But with the addition of new services, the port rotation of the CRN Service will change to Qingdao, Shanghai, Ningbo and Vladivostok.

HMM has been trying to improve its profitability amid unfavorable market conditions. Its operating loss reached 577 billion won (US$545 million) last year, widening from a net loss of 407 billion won a year earlier. The shipping company blamed the increased loss on higher oil prices and lower freight rates. 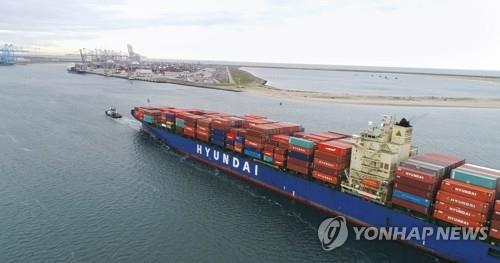