SEOUL, April 24 (Yonhap) -- The number of foreign tourists visiting Seoul reached a record high of 3.03 million in the first quarter of 2019 due to an increase in the number of individual Chinese visitors, the Seoul metropolitan government said Wednesday.

The city government attributed the rise to more individual Chinese tourists traveling to the South Korean capital at a time when South Korea and China have gradually recovered diplomatic relations.

The recovery came on the heels of China's 2017 ban on selling Korea-bound package tours in apparent retaliation over the deployment of a U.S. missile defense system here.

On Wednesday, the city government also revealed the results of a survey on the status of foreign tourists in 2018. The survey, jointly conducted by the Seoul Tourism Foundation, involved 6,000 foreign tourists.

Last year, foreign visitors stayed an average of 5.44 days, up from five days the previous year.

Foreign tourists' overall satisfaction level about tours to Seoul was 4.25 points out of five, up from 4.16 points.

They were satisfied with security at 4.35 points and shopping at 4.27 points, while giving fewer points to language communication at 3.69 points and tourist guide services at 3.95 points.

Japanese visitors topped the list of returning visitors at 68.5 percent, with those from the Americas showing the least intention to return to Seoul at 27.7 percent. 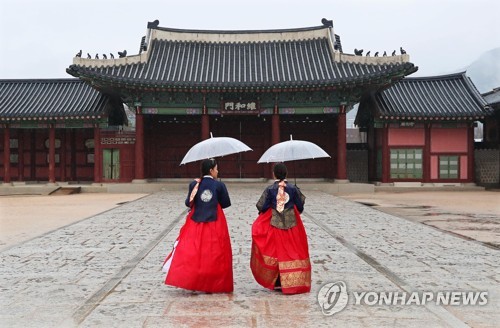