SEOUL, April 25 (Yonhap) -- The South Korean economy is estimated to have unexpectedly shrunk in the first quarter on a drop in capital investment and falling exports, the Bank of Korea (BOK) said Thursday.

The country's gross domestic product (GDP) is projected to have backtracked 0.3 percent in the first quarter of the year from the previous quarter, according to estimates from the central bank.

The reading marks the lowest growth since the fourth quarter of 2008, when Asia's fourth-largest economy contracted 3.3 percent on-quarter.

From the same period last year, the local economy expanded 1.8 percent in the January-March period, which also marks the slowest growth since the third quarter of 2009, according to the central bank.

The country's capital investment plunged 10.8 percent on-quarter, while its exports dropped 2.6 percent. Its imports fell 3.3 percent over the cited period, according to estimates from the central bank.

The data came a week after the central bank lowered its growth outlook to 2.5 percent for the year from the 2.6 percent made in January, citing economic uncertainties and weaker-than-expected exports. 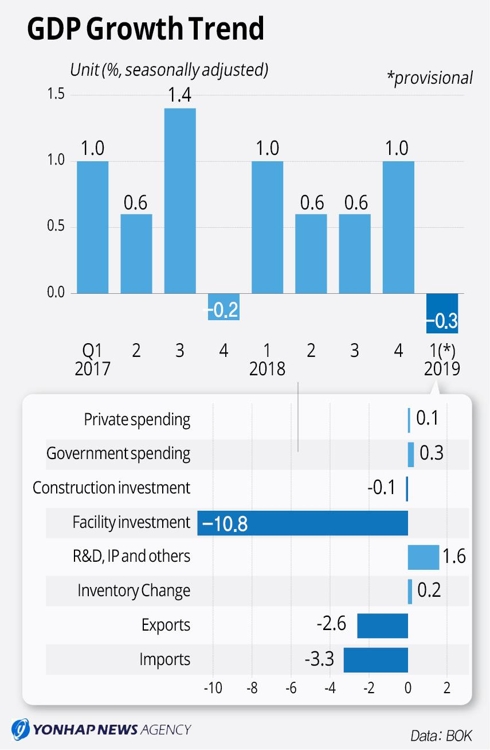 Despite the negative growth in the first quarter, BOK officials remained optimistic the country will reach its annual growth target, insisting the sluggish growth has largely been caused by "temporary and exceptional" factors.

"It was affected by temporary factors, such as warmer temperatures than last year that led to a reduction in spending on clothes," Park Yang-su, head of the BOK's economic statistics department, told a press briefing.

"Temporary and exceptional factors had a considerable effect. I believe there is no need to hold an excessively pessimistic view about our economy at this point," he added.

In the first quarter, government spending increased 0.3 percent from the previous quarter but its contribution to GDP growth came to negative 0.7 percent, compared with a 1.2 percent contribution in the fourth quarter of last year.

Park said this too will not have any adverse effect on the country's economic growth at least in the long-run, insisting the negative impact in the first quarter only means the government may have failed to frontload its annual spending.

"The government will execute its annual budget. The leftover from the first quarter in government budget will be spent later on and the contribution of government spending to growth will considerably rise down the road," he said.

Since the central bank slashed its 2019 growth outlook, the government has been working to devise a supplementary budget, which was endorsed by the Cabinet on Wednesday.

The government submited a 6.7 trillion won (US$5.8 billion) extra budget bill to the National Assembly earlier in the day.

"A negative 0.3 percent growth is a very exceptional figure that marks the lowest since the (2008) financial crisis," Gong Dong-rak, an analyst at Daeshin Securities, said. "The market may now have little faith in the 2.5 percent annual growth rate the Bank of Korea suggested last week."

"A recovery in the semiconductor industry may also not be easy due to a global economic slowdown. The downward pressure is expected to continue in the latter half of the year," Lee Gune-tae, a fellow researcher at LG Economic Research Institute, said.

Sung Tae-yoon, an economics professor at Seoul's Yonsei University, said the worse-than-expected growth in the first quarter may hint at a possible rate reduction down the road.

"We may say we are facing a near economic crisis when only looking at the drops in exports and investment," the professor said.

"Under such conditions, a 6.7 trillion-won extra budget seems less than enough, and this could support the call for a rate reduction," he added.

The central bank kept its policy rate frozen at 1.75 percent for the fifth consecutive month in its latest rate-setting meeting held last Thursday, despite slashing its growth outlook to 2.5 percent from a 2.6 percent forecast three months earlier.

The BOK earlier forecast exports and domestic consumption to improve in the second half.

Sluggish exports may still be a problem for the country's export-dependent economy.

In the January-March period, exports contracted 2.6 percent from three months earlier, while its imports shrank 3.3 percent on-quarter, according to the BOK estimates.

However, on an annual basis, GDI contracted 0.6 percent, the lowest number since the first quarter of 2009, when it contracted 2.5 percent on-year.