SEOUL, April 25 (Yonhap) -- The cultural heritage authorities said Thursday they will open to the public South Korea's oldest and largest stone pagoda next week after 20 years of restoration.

The National Research Institute of Cultural Heritage, along with the North Jeolla provincial government and the Iksan city government, is scheduled to hold a ceremony to mark the dedication of the restored western stone pagoda at the site of Mireuk Temple in the southwestern provincial city of Iksan on Tuesday.

The pagoda is the westernmost of three pagodas at the temple built under orders from King Mu (600-641), leader during the peak years of the Baekje Kingdom (18 B.C.-A.D. 660). It is South Korea's National Treasure No. 11.

Originally nine stories tall, the stone pagoda had only six stories by the early 20th century. To prevent further collapse, the Japanese colonial authorities in 1915 poured tons of concrete on parts of the tower. However, it was diagnosed as dangerous in a safety check conducted by the cultural heritage authorities in 1998. 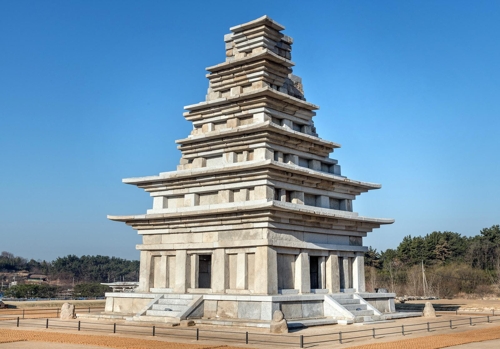 In 1999, the Cultural Properties Committee under the Cultural Heritage Administration decided to disassemble and restore the structure, and the research institute closed the pagoda to the public in 2001 for a 23 billion-won (US$20.3 million) project to restore it to a six-story tower.

It took 16 years for the research institute to take down its stone blocks and remove 185 tons of poured concrete. In 2017, the institute completed the reassembly of the stone blocks before fully removing all the scaffolding around the structure early this year.

Eighty-one percent of the old stone blocks from before the restoration were used, and "hwangdeungseok" granite, produced in Iksan, was used for new stone blocks. The proportions of old and new stone blocks in the restored pagoda amount to 65 percent and 35 percent, respectively.

In 2009, an ancient record on a gold sheet, discovered in the process of the pagoda's disassembly, showed that the Baekje queen, a daughter of senior official Sataek Jeokdeok, had the temple constructed and that the temple was built in 639.

An official at the institute said the work on the stone pagoda is the longest restoration for a single cultural property, adding that the restoration has given a boost to its original form and its structural stability.