The two Koreas, however, appear to be facing a bumpy road as many agreed-upon joint cross-border projects remain stalled, apparently tied down by the impasse in denuclearization talks between Washington and Pyongyang, experts said.

That first summit, held at the truce village of Panmunjom on April 27, 2018, produced the so-called Panmunjom Declaration, in which the two sides agreed to work toward the complete denuclearization of the Korean Peninsula, improve inter-Korean relations, ease military tensions and expand cross-border exchanges and cooperation.

"Until until the end of 2017, tensions were running very high, as North Korean continued its missile and nuclear provocations, with some even talking about military options," said Hong Min, a senior researcher at the Korea Institute for National Unification. "Now the tensions, to some extent, have gone away."

"We are currently talking about how to achieve lasting peace and denuclearization in detail without the concerns that gripped us before -- a huge turnaround for us that is attributable to the April summit," he added. 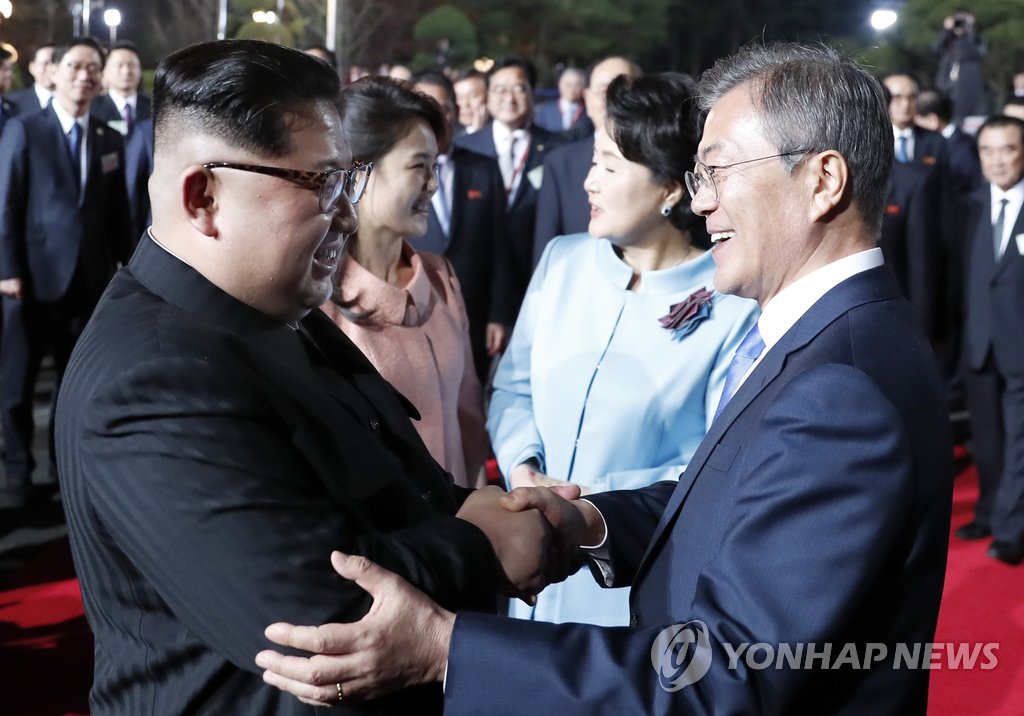 Not only did the April summit mark the beginning of a whirlwind of inter-Korean diplomacy throughout last year but it also helped ease the animosity that had dogged inter-Korean relations for years and jump-start long-suspended contacts and exchanges.

According to the unification ministry, which handles North Korea affairs, the two Koreas held 36 rounds of government-to-government talks last year, including two more summits between Moon and Kim in May and September.

The number of South and North Koreans crossing the border after receiving state approval soared to 7,498 last year from a mere 115 a year earlier, the ministry said.

The two Koreas held reunions of families separated by the 1950-53 Korean War in August for the first time in about three years. Around 100 families from each side met their loved ones at a Mount Kumgang resort on the North's east coast.

They also conducted joint surveys to examine the state of roads and railways in the North as part of efforts to implement the April summit agreement to modernize and connect transportation infrastructure over the border. Similar talks were held to boost cooperation in forestry, communications and sports.

In order to bolster exchanges and contacts by keeping a round-the-clock communication channel open, the two Koreas launched a joint liaison office in the North's border town of Kaesong in September.

Such brisk cross-border exchanges, however, have been showing signs of slowing down in recent months, apparently hamstrung by the lack of progress in denuclearization.

Concerns have been mounting further that the sluggish mood could drag on following the breakdown of February's summit between North Korean leader Kim and U.S. President Donald Trump. The summit ended without a deal as the two failed to find common ground over Pyongyang's denuclearization steps and Washington's sanctions relief.

With stalled denuclearization talks and little indication of an immediate easing or lifting of sanctions on Pyongyang, a range of joint cross-border projects have been delayed and put on the back burner.

A prime example is Seoul's push to send Tamiflu antiviral drugs to North Korea, which has not materialized, apparently affected by Washington's concerns that it could undermine the sanctions on Pyongyang. The drugs' delivery, originally planned for January, has now definitively missed peak flu season.

The two Koreas have not been able to conduct further joint surveys on the North's roads and railways either, let alone commence actual construction work, since a groundbreaking ceremony for the joint project was held in late December.

On the economic cooperation front as well, little headway has been made in the face of strong objections from Washington.

South Korea's efforts, in particular, to resume the operation of a joint industrial complex in Kaesong and tours to Mount Kumgang, have produced no progress in the face of U.S. opposition.

Operations at the industrial park and tours to Mount Kumgang came to a stop in 2016 and 2008, respectively, due to strained ties between the two Koreas.

Seoul wants to bolster inter-Korean economic cooperation in the hope that it could foster a peace mood and incentivize the North to give up its nuclear weapons program.

Pyongyang has chafed at such delays, calling on Seoul not to mind the U.S. but to be more active in implementing agreed-upon joint projects.

Last month, the North abruptly withdrew all of its staff from the joint liaison office. Pyongyang sent some of them back days later but did not provide clear reasons for the pullout.

The two Koreas have skipped a meeting of the office's co-heads for nearly two months.

In an apparent expression of displeasure over the current stalemate in inter-Korean relations, North Korean leader Kim called on South Korea to stop trying to play the role of mediator or facilitator in stalled denuclearization talks but voice its own opinions as a "stakeholder" to "advocate interests" of the people of the two Koreas.

To tackle the stalemate and help jump-start the stalled denuclearization talks, President Moon recently expressed hope for a fourth inter-Korean summit, but the North has yet to respond to the offer.

Experts say that those situations clearly illustrate how much inter-Korean relations are dictated by progress in denuclearization talks between Washington and Pyongyang.

"Given that the nuclear issue is an international matter, there is a limit on the amount of wiggle room the two Koreas have," Lim Eul-chul, a professor at the Institute for Far East Studies at Kyungnam University, said. "We have seen that inter-Korean relations have been dictated by nuclear talks once again."

Hong Min of the Korea Institute for National Unification said that it is the time for the Seoul government to play a more active role in bridging the gap between the U.S. and North Korea and not restrict itself to its self-imposed role of mediator or facilitator.

"We can say that the government has focused on helping remove distrust and create an environment for talks between the North and the U.S. over the past year. Now is the time for the government to go beyond that and play a more active role as a stakeholder to demand what is needed to be done from both sides," he said.