(ATTN: UPDATES with task force on extra budget in paras 9-11)

SEJONG, April 26 (Yonhap) -- South Korea said Friday it is pushing to diversify sources of oil imports and support its exporters in a move to minimize the impacts of U.S. sanctions on Iran.

Lee Ho-seung, the first vice minister of economy and finance, made the comments in a regular meeting with relevant officials at a government building in Seoul. Lee did not provide any further details on the diversification of sources of crude oil imports. 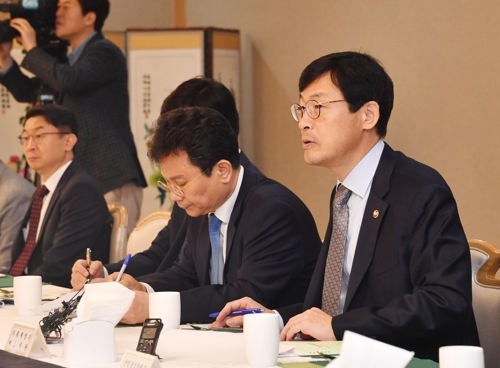 The move came days after the United States said it will end its sanctions waivers for South Korea, China, India and five other countries for Iranian oil imports next Thursday.

A South Korean delegation led by Deputy Foreign Minister for Economic Affairs Yun Kang-hyeon visited Washington earlier this week for talks with U.S. officials on the issue. No details of the meeting were immediately available.

Iranian crude accounted for 13.2 percent of South Korea's total oil imports in 2017, but it plunged to 5.2 percent last year. For the first two months of 2019, Iranian oil had a 5.4 percent share of the country's total imports, only the sixth-largest supplier after countries like Saudi Arabia and Kuwait.

Separately, the government launched a task force to make sure that a 6.7 trillion-won ($5.8 billion) extra budget will quickly be implemented as soon as the budget bill passes the parliament, according to the finance ministry.

On Thursday, the government submitted the extra budget bill to the National Assembly for approval. The bill is meant to, among other things, cope with a slowdown in Asia's fourth-largest economy and rising concerns over the fine dust that often blankets South Korea.

But it remains to be seen when the parliament can vote on the bill amid a political standoff between the ruling Democratic Party and the main opposition Liberty Korea Party over the ruling party's attempt to fast-track three separate bills, including the one on electoral reform.