SEOUL, April 26 (Yonhap) -- South Korea's defense ministry said Friday it has discovered 17 pieces of bone, believed to be those of at least one soldier killed in the 1950-53 Korean War, inside the Demilitarized Zone (DMZ).

The bone pieces were found this week during an excavation and demining project underway on Arrowhead Ridge, a former battle site inside the DMZ that separates the two Koreas, the ministry said.

Since South Korea launched the excavation project earlier this month, the military has found a total of 32 pieces of bones, it added.

"(The military) found three pieces on Monday and 14 pieces that are believed to be the remains of an entire body on Tuesday," the ministry said in a release.

Noting that it remains unclear whether the bone pieces are from a single person, the military said it will carry out a detailed examination and DNA analysis to identify their origins.

But the North has remained unresponsive to its call to jointly launch the project as agreed, leaving the South Korean military to carry out the operation alone. 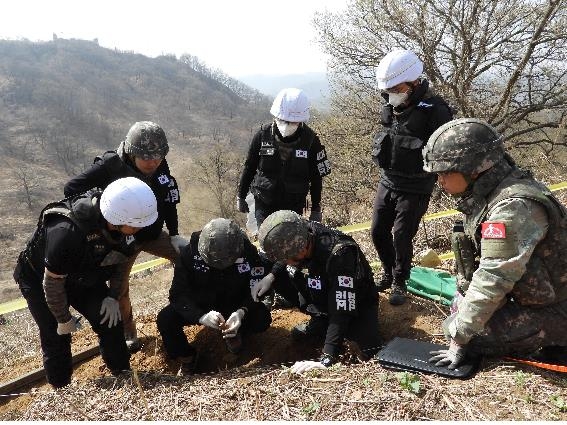