VLADIVOSTOK, Russia, April 26 (Yonhap) -- North Korean leader Kim Jong-un on Friday wrapped up a three-day visit to Russia, apparently with lukewarm support from President Vladimir Putin for his push to break a logjam in nuclear talks with the United States.

Kim's first summit with Putin in Vladivostok on Thursday appeared to have fallen short of his expectations as Moscow remained cautious about publicly backing Pyongyang at the risk of aggravating tensions with Washington, analysts said.

Putin called for a peaceful resolution of the North's nuclear quandary, but he made no public mention in support of Pyongyang's demands that Washington ease economic sanctions and show flexibility in hitherto unfruitful nuclear negotiations.

Putin also voiced support for endeavors to "normalize" the Washington-Pyongyang relationship and refrained from outwardly advocating for the phased, incremental denuclearization approach that the North favors.

"I think Kim might have felt frustrated as there was no public statement on the part of Russia in support of the North's denuclearization formula," Park Won-gon, a professor of international politics at Handong Global University, said.

"Russia appears to have taken the U.S. stance much into consideration, a reason why Putin has made statements just in broad generalities," he added. 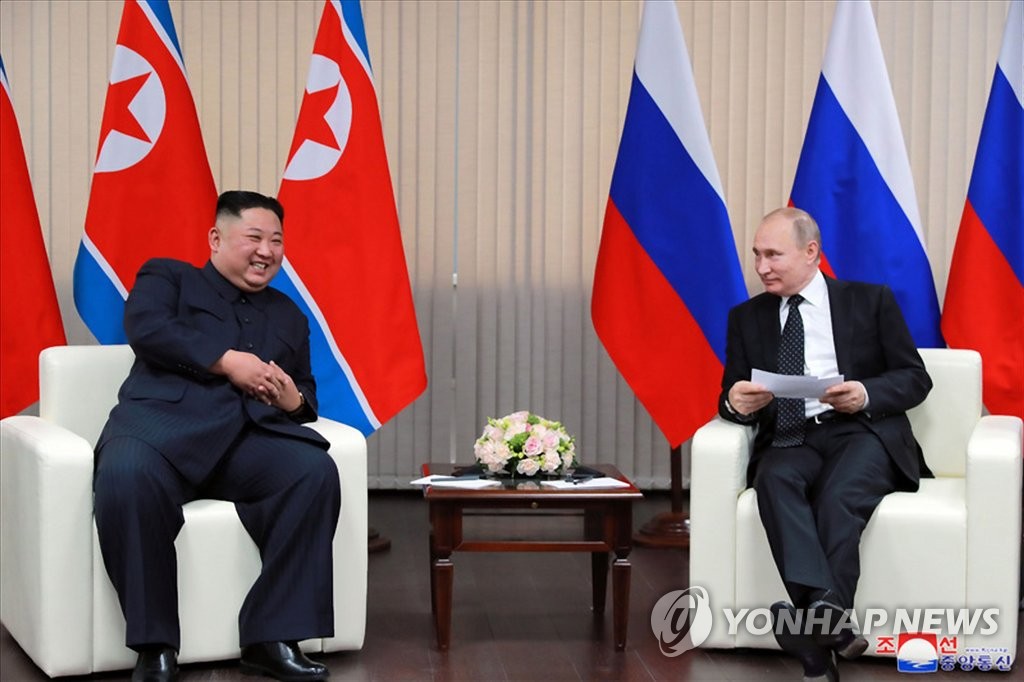 Chang Duck-joon, a professor of Russian diplomacy at Kookmin University, noted that Kim appears to have failed to use the Vladivostok summit to make a breakthrough in the negotiations with Washington that have been stalled since the no-deal summit between Kim and U.S. President Donald Trump in Hanoi in February.

"Rather, Putin appears to have made Kim nervous by offering just vague diplomatic support so as to keep the North closer to the Russian side," he said.

During the summit, Kim was seen striving to rally Russia's support in his drive for sanctions relief and economic development amid less-than-expected support from China, which is preoccupied with grueling trade negotiations with the U.S.

"It is my and the DPRK government's firm, unwavering stance and strategic policy line to relentlessly strengthen and develop the strategic, traditional, friendly relationship between the DPRK and Russia in line with the demands of the new century," he said during a reception after the summit.

On the U.S., Kim minced no words, rebuking America's "unilateral" attitude. His tough rhetoric was seen as another implicit call for Putin to back Pyongyang.

"The situation on the Korean peninsula and (in) the region is now at a standstill and has reached a critical point where it may return to its original state as the U.S. took a unilateral attitude in bad faith at the recent second DPRK-U.S. summit talks," Kim was quoted as saying by the North's Korean Central News Agency.

The mood of Thursday's summit was seen as amicable, with Putin stressing the two countries' traditional partnership. Yet Russia's treatment of the North Korean leader on the eve of the summit appeared to be a source of frustration for Pyongyang.

Despite a pomp-filled ceremony and red carpet treatment at the Vladivostok station upon his arrival, Yury Trutnev, Russia's deputy prime minister and presidential plenipotentiary envoy to the Far Eastern Federal District, skipped the welcoming event to oversee an operation to extinguish a fire in eastern Siberia.

Putin arrived in the city the next day due to a hectic domestic schedule.

The summit also served as a stark reminder of Russia's desire to reassert leverage over the shifting contours of geopolitics on the peninsula.

During a press conference after the summit, Putin stressed the need for an "international" security guarantee for the North, saying a bilateral security arrangement will "hardly be enough."

Amid concerns that it could be left out of the loop, Russia has been seen championing a multilateral dialogue platform where it can maintain its diplomatic presence and keep other major power participants in check.

Kim's efforts to foster personal rapport appear to have fared well. Putin cast him as a "fairly open person and quite an interesting and substantive interlocutor."