The North's media has made a series of such appeals in recent months, as joint projects agreed between the two sides have made little headway amid a lack of progress in denuclearization negotiations between the North and the U.S.

Stressing that Seoul's stance and attitude are "crucial in implementing the Panmunjom Declaration," Uriminjokkiri, a propaganda website, urged the South "not to vacillate ... or mind others."

The declaration, signed between President Moon Jae-in and North Korean leader Kim Jong-un on April 27, 2018, during their first summit, calls for joint efforts for the complete denuclearization of the Koran Peninsula and for fostering exchanges and cooperation between the two Koreas.

In a separate article, the media outlet claimed that the U.S. has been sabotaging the improvement of inter-Korean ties and warned that toadyism and dependence on foreign powers "will paralyze the spirit and the power of self-reliance."

"If we resort to the unified power of our people, any outside sanctions, pressures, challenges or ordeals cannot stand in our way toward prosperity," it said.

Meari, another propaganda website, carried a similar article, criticizing military ties between Seoul and Washington and calling on Seoul to stop buying weapons from the U.S.

A day earlier, the North's Committee for the Peaceful Reunification of the Country lambasted the Seoul-Washington joint air force drills underway in the South since earlier this week for a two-week run.

Though the allies have said that joint exercises are defensive in nature, Pyongyang has claimed they are nothing but rehearsals for invasion. 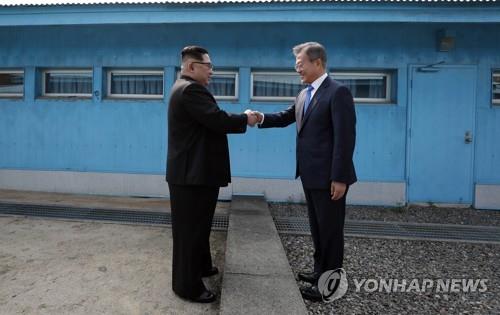