SEOUL, April 26 (Yonhap) -- Seoul prosecutors said Friday that they have asked for an arrest warrant for former KT Corp. Chairman Lee Suk-chae over his suspected involvement in the telecom giant's hiring scandal.

According to the Seoul Southern District Prosecutors' Office, the request for Lee's detention was filed after prosecutors confirmed his involvement in nine cases of hiring irregularities at KT in 2012. 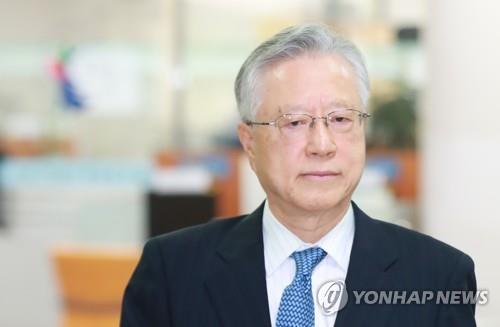 Lee is accused of giving instructions to provide preferential treatment to nine job applicants with ties to powerful figures, including the daughter of Rep. Kim Sung-tae, a former floor leader of the main opposition Liberty Korea Party.

Lee, who had served as KT chairman from 2009 to 2013, faces charges of obstruction of business in connection with the alleged hiring irregularities, prosecutors said.

The Seoul Southern District Court plans to hold a hearing on Tuesday to decide whether to approve Lee's arrest.

Lee has been summoned by prosecutors twice to be grilled about his role in the KT hiring scandal but reportedly denied the charges against him.

In a related development, Seo Yu-yeol, a former KT president, and Kim Sang-hyo, a former KT executive in charge of personnel affairs, were arrested last month and indicted last week on charges that they gave undue favors to Rep. Kim's daughter and five other applicants for KT positions in 2012.

Prosecutors suspect that Seo and Kim Sang-hyo gave preferential treatment to some job candidates on an instruction from Lee.