Two special parliamentary committees on judiciary and political reforms had originally planned to fast-track four measures, including an election reform bill, on Thursday in line with a package deal reached by the four parties.

The deal, which excludes the main opposition Liberty Korea Party (LKP), includes the establishment of a unit to investigate alleged corruption by high-ranking government officials and enhances the police's authority to conduct probes.

But the fast-track drive was put on hold as the assembly panels have yet to designate the bills as fast-track measures amid vehement clashes by the two parties.

After hours of tensions between the DP and the LKP, the four parties completed the submission of the four bills to the National Assembly. 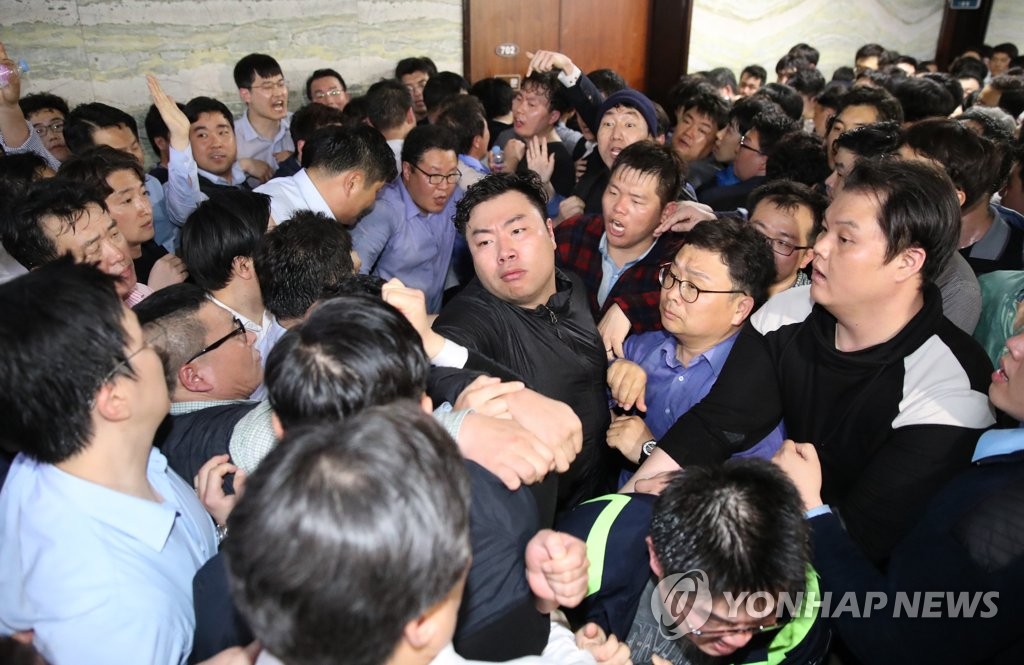 On Thursday, LKP members attempted to deter DP lawmakers from submitting to the National Assembly a bill to revise the criminal procedures law, one of the four bills that the four parties seek to fast track. The other three bills have already been submitted to the assembly.

The conservative LKP said that the election law has always been revised through bipartisan agreements, not by a political deal involving several parties.

LKP members occupied the assembly office in charge of bills to prevent DP members from entering it for submission.

During that process, DP and LKP lawmakers engaged in physical scuffles, with some suffering bruises and rib fractures.

In what could be an ugly development, the two parties bickered over the mobilization of nail pullers, iron hammers and claw hammers. The LKP claimed the DP mobilized those tools to break down the door while the DP insisted they had nothing to do with the assembly's decision.

National Assembly Speaker Moon Hee-sang on Thursday requested the government to send police officers to the assembly as partisan clashes effectively made it impossible for the office to do its work.

The minor opposition Bareunmirae Party (BP), meanwhile, held a meeting with lawmakers to discuss a recent row over the fast-track bid.

As the BP approved the package deal by a narrow margin earlier this week, some members vehemently opposed the move, claiming there was no consensus for the decision.

BP floor leader Kim Kwan-young forcibly replaced its two lawmakers sitting in the special panels in a bid to ram through the fast-track bid, inviting strong condemnation from party members.