SEJONG, April 29 (Yonhap) -- South Korea's finance minister on Monday ruled out the possibility that the government would adjust the country's economic growth target despite an economic slowdown.

"For now, (the government) has no plan to revise its growth rate forecast," Hong Nam-ki, the minister of economy and finance, told reporters after a meeting with officials at a government building in Seoul.

His comments came days after the Bank of Korea said that the country's gross domestic product backtracked an estimated 0.3 percent in the first three months of the year from the previous quarter, marking the worst performance in almost a decade. 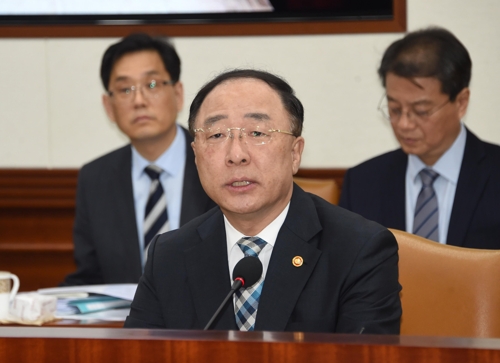 South Korea has projected the nation's economy to expand between 2.6 percent and 2.7 percent this year. The South Korean economy grew 3.1 percent in 2017 and 2.9 percent in 2016.

In March, global credit rating setter Moody's Investors Service trimmed its growth outlook for the South Korean economy this year to 2.1 percent from its previous forecast of 2.3 percent in November last year.

Policymakers here are pinning hopes that the country's outbound shipments will recover during the second half of the year and chip prices will rebound gradually as well.

Bank of Korea Gov. Lee Ju-yeol also estimated earlier that the central bank is not considering a rate cut as it expects exports and domestic consumption to improve in the second half of the year.

Earlier this month, the bank also kept its base rate at the current 1.75 percent for the sixth consecutive month.

Hong has said that a 6.7 trillion-won (US$5.8 billion) extra budget could provide momentum for an economic recovery in the second half and contribute to boosting South Korea's gross domestic product by 0.1 percentage point this year.

He asked the National Assembly to quickly pass the extra budget bill, but it remains unclear when the parliament could vote on the bill amid a deepening political standoff over the ruling party's attempt to fast-track three major bills, including one on electoral reform.

Also Monday, Hong said that the government will make efforts to stabilize domestic gas prices in preparation for a hike in global oil prices.

Iranian crude accounted for 13.2 percent of South Korea's total oil imports in 2017, but that figure plunged to 5.2 percent last year. For the first quarter of 2019, Iranian oil had a 7.4 percent share, according to data compiled by the state-run Korea National Oil Corp.

The minister also reiterated his earlier stance that the currency authorities will take swift action, if needed, to curb the Korean won's increased volatility relative to the U.S. dollar.

"We are closely watching the won's movement," Hong said. "We will take measures if the currency rate shows abnormal and excessive volatility."

The Korean won slipped to an over two-year low of 1,160.5 won against the U.S. dollar on Thursday as the nation's economy unexpectedly contracted in the first quarter and the dollar remained strong globally.

The local currency finished at 1,158.5 won to the greenback, up 2.5 won from the previous session's close.

"Uncertainties over the U.S. economy and the South Korean economy, as well as emerging markets, have affected (the currency rates)," Hong said.