In an interview with Fox News, Bolton was asked if President Donald Trump would go along with Russian President Vladimir Putin's recent suggestion that the six-party talks, which collapsed in 2009, be restored to break the impasse in denuclearization negotiations between Washington and Pyongyang.

"I think it's not just what our preference is," Bolton said. "I think (North Korean leader) Kim Jong-un, at least up until now, has wanted the one-on-one contact with the United States, which is what he has gotten."

The meeting was widely regarded as part of North Korea's push to secure sanctions relief from other major powers following the collapse of February's second summit between Kim and Trump. 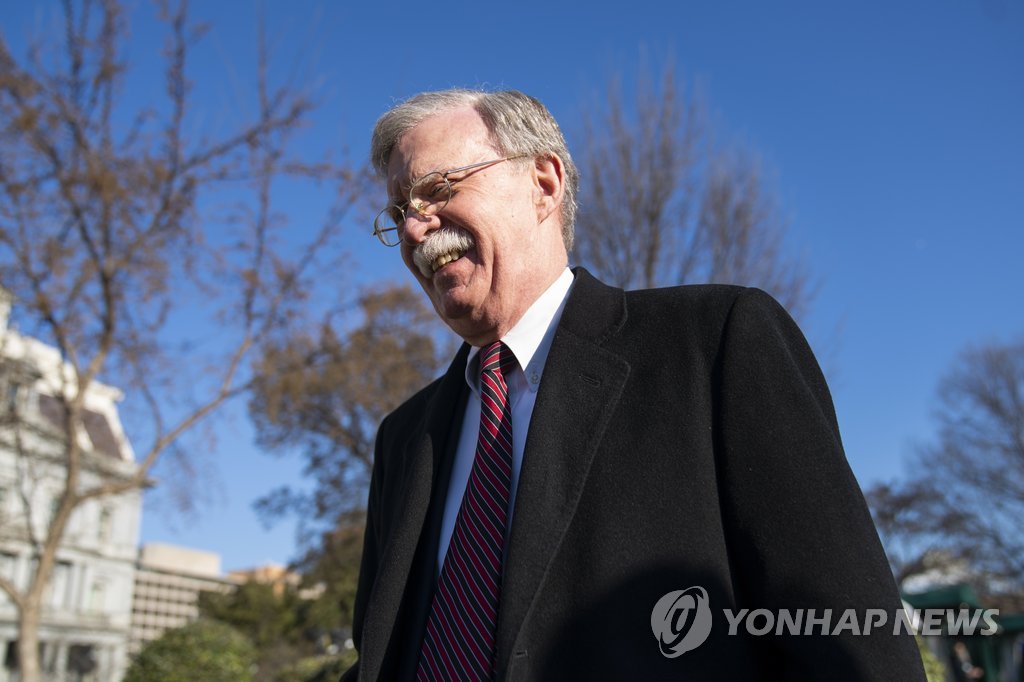 Bolton noted that the six-party talks, which involved the two Koreas, the U.S., Japan, China and Russia, failed to dismantle the North's nuclear weapons program, but that Washington has not excluded the other stakeholders from the diplomatic process.

"That doesn't mean we don't consult, as the president just did on Friday very closely with Prime Minister Abe of Japan," he said. "We consult with the Russians, the Chinese, obviously the South Koreans. President Moon Jae-in was here just a few weeks ago."

The Kremlin said Sunday that when dealing with the North, Russia is "acting in its home region" unlike the U.S. that "goes beyond its home region," according to Russia's Rossiya-1 television channel.

The remarks are in line with Moscow's apparent desire to reassert leverage over the peninsula and avoid being alienated in the Korea peace efforts where Washington and Beijing have been playing significant roles.

"For us, North Korea is a neighboring country. We have a common border and when we deal with North Korea we are acting in our home region," Russia's presidential press secretary Dmitry Peskov told Rossiya-1.

"When the Americans deal with North Korea, they are acting in our region, not theirs."

Russia's apparent willingness to remain a key player in geopolitics over the peninsula has stoked concerns that the Korea peace process could get complicated with multiple parties likely to vie to maximize their respective interests in the process.

In the interview with Fox News, Bolton also said Trump is still open to a third summit with Kim.

"(Trump) feels pretty strongly about it. He said repeatedly he thinks he has a good relationship with Kim Jong-un," Bolton said.

The second Trump-Kim summit in Vietnam broke down because the U.S. wanted a "big deal" under which the North would dismantle all of its weapons of mass destruction programs in exchange for sanctions relief, while Pyongyang sought a step-by-step approach.

Asked if the North's position is any more attractive to Trump now, Bolton was skeptical.

"I think if you look at the past policies, the answer to that is no," he said. "The past policies that have tried a step-by-step approach have all failed. Kim or his father have gotten economic relief and then somehow have never gotten around to that commitment to denuclearize they've now made five times expressly in the past 25 years."

The adviser was also asked whether Putin is being helpful in the process.

"Well, I think both Russia and China could tighten up their enforcement of the sanctions," Bolton replied. "I think they've been pretty good about it in recent months, but I think they could always tighten up. That would help keep the pressure on North Korea, which, after all, is what brought them to negotiate with President Trump to begin with."

He added that Putin probably wants to establish rail links from Russia to South Korea via the North.

Bolton denied that the U.S. paid any money to North Korea to secure the release of American college student Otto Warmbier in 2017.

The Washington Post reported last week that the North Koreans had asked a U.S. envoy to sign a pledge agreeing to the payment of US$2 million for the care of Warmbier, who fell into a coma shortly after he was detained in Pyongyang in early 2016 and spent the next year and a half hospitalized there.

Trump has denied that any payment was made to the North.

"Absolutely not, and I think that's the key point," Bolton said when asked if the U.S. paid the North. "The president has been very successful in getting 20-plus hostages released from imprisonment around the world and hasn't paid anything for any of them."

He did acknowledge that it was his understanding that the North Koreans demanded payment and that the U.S. signed a relevant pledge.

Warmbier died several days after he was released and flown back to the U.S. in June 2017.