The 50-minute-long documentary, aired on the Korean Central TV Broadcasting Station on Sunday night, came a day after Kim returned to North Korea from a trip to Russia's Far East city of Vladivostok last week. He and Putin held their first-ever summit on Thursday to discuss denuclearization of the Korean Peninsula and their bilateral ties.

"(Kim's trip to Russia) is a historic event that has paved the way for an innovative turnaround that will further enhance traditional, good-faith and cooperative relations in accordance with the demand from a new era under the new situations. And it will shine in the solidarity history of North Korea and Russia," the documentary said.

The film highlighted keen attention focused on the Kim-Putin summit by showing several times a throng of media people and local citizens gathering around their summit venue and routes that Kim's motorcade used during his three-day stay. 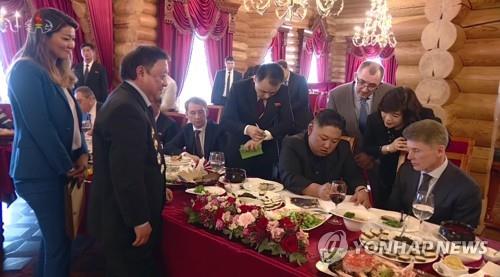 In what appeared to be an off-the-cuff moment, the film aired footage of a person approaching Kim during a luncheon meeting on Friday, the last day of his stay in Vladivostok, apparently trying to get him to autograph a book. Kim signed it, writing, "(I) hope this moment will become a great memory."

Watching the impromptu moment, North Korean First Vice Foreign Minister Choe Son-hui was seen clapping her hands. The person who received Kim's autograph was also seen returning to his seat and apparently showing it off to his colleagues.

The film, however, made no mention of denuclearization, one of the top agenda items that the two leaders discussed during their almost four-hour-long summit meeting on Thursday.

According to the Korean Central News Agency, the North's official media, Kim emphasized during his summit with Putin that peace and security on the Korean Peninsula will entirely depend on Washington's future attitude.

Russia media reported that Putin underscored the importance of a diplomatic resolution to the North's nuclear issue.

Kim's trip to Vladivostok marked his first foreign travel since his second summit with U.S. President Donald Trump in Hanoi in February fell apart as they failed to bridge differences over the scope of Pyongyang's nuclear disarmament and Washington's sanctions relief.

The North aired a similar documentary film featuring Kim's February summit in early March, in which it said the North and the U.S. can write a new history and future if they engage in the negotiations with a "fair proposal, appropriate attitude and will to solve the problem."