SEOUL, April 29 (Yonhap) -- Tours to the southern side of the truce village of Panmunjom that straddles the inter-Korean border will resume this week, the defense ministry said Monday.

The popular tours to the areas south of the Military Demarcation Line inside the Joint Security Area (JSA) have been suspended since October last year, as South and North Korea launched a campaign to demilitarize the area under a military tension reduction agreement signed a month earlier.

The two Koreas had agreed to restart the tour program after the area's demilitarization and allow visitors to freely move around both sides of the JSA from 9 a.m. to 5 p.m. across the demarcation line running through the zone.

But the plan has been delayed as the two Koreas and the United Nations Command (UNC), which oversees activities inside the DMZ, have not reached an agreement on a joint code of conduct for such free movement, and the South has decided to resume tours to only the southern side of the area. 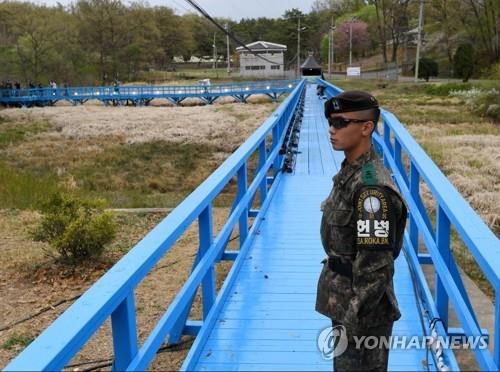 "Marking the one-year anniversary of the Panmunjom Declaration, the government will first reopen to the public the southern part of the JSA starting May 1," the defense ministry said in a release, adding that the measure is "aimed at expediting the prolonged trilateral talks to better prepare for the planned free movement."

The Panmunjom Declaration is an agreement that President Moon Jae-in and North Korean leader Kim Jong-un signed after their first summit, held at the truce village on April 27, 2018. Under the deal, they agreed to work toward the complete denuclearization of the Korean Peninsula and improve inter-Korean relations.

Under the new tour program, more historic spots will be available, including the Foot Bridge where Moon and Kim strolled together during the summit, which was seen by many as best symbolizing the inter-Korean peace mood.

So far, the tightly controlled group tours have only allowed access to certain parts of the area, such as the iconic blue conference buildings where the armistice that ended the 1950-53 Korean War was signed.

"In close coordination with the UNC, the tour will make visitors experience directly the newly demilitarized DMZ," the ministry said, vowing to "make every effort to expand the tour across the inter-Korean border as planned."

South Korean citizens who want to visit the tour can apply via the website of the National Intelligence Service, and foreigners can join the program through designated tour agencies.

During the third summit between Moon and Kim in Pyongyang in September, the two Koreas clinched the Comprehensive Military Agreement, which calls for a series of trust-building and arms control measures under a broader scheme to halt all hostile acts against each other. 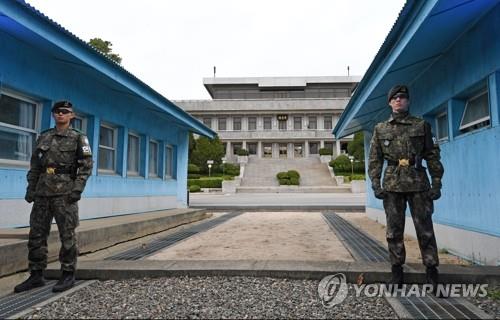 (LEAD) Tours to JSA to resume on southern side this week

(LEAD) Tours to JSA to resume on southern side this week