SEOUL, April 29 (Yonhap) -- South Korea will continue to push for another summit with North Korea, the unification ministry said Monday, after speculation arose that Seoul may be backing down from its push to hold an inter-Korean summit as soon as possible.

As the North has yet to respond to the offer, Moon stated Saturday that now is the time to "take a breather" in pushing for progress in inter-Korean issues and that people should wait for "those who come slowly." That prompted speculation that Seoul may be shifting its focus from pushing for an early summit.

"As the President has expressed his willingness to hold a summit regardless of format and location, the unification ministry continues to coordinate with the ministries concerned to fully prepare for an inter-Korean summit," ministry spokesman Lee Sang-min said during a press briefing.

While admitting that the progress in carrying out joint projects and agreements with North Korea was slower than expected, the official said the two sides "remain committed to the continued push for the full implementation of the joint declaration."

During the first summit on April 27, 2018, Moon and Kim signed the Panmunjom Declaration, which calls for working toward the complete denuclearization of the Korean Peninsula and improving inter-Korean relations, among others.

But inter-Korean ties have not moved forward much since then, with Kim's second summit with U.S. President Donald Trump in Hanoi in February ending without tangible results.

Meanwhile, the spokesperson said the government will wrap up the ongoing remodeling of 13 video conference centers nationwide by the end of this month as scheduled so they can be used for envisioned video reunions of families separated by the 1950-53 Korean War.

"We are discussing with ministries concerned the possible proposal of providing related equipment to North Korea," Lee noted.

The leaders of the two Koreas agreed to hold video reunions and exchanges of video letters for separated families. Seoul earlier secured sanctions exemptions from the U.N. Security Council to send equipment needed for the operation to its reunion center in Pyongyang. 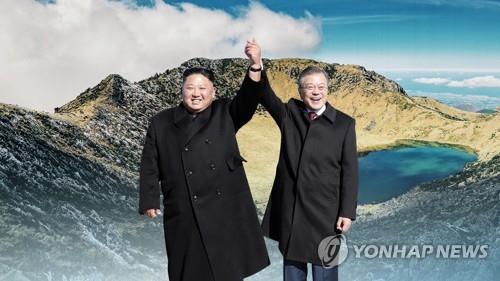